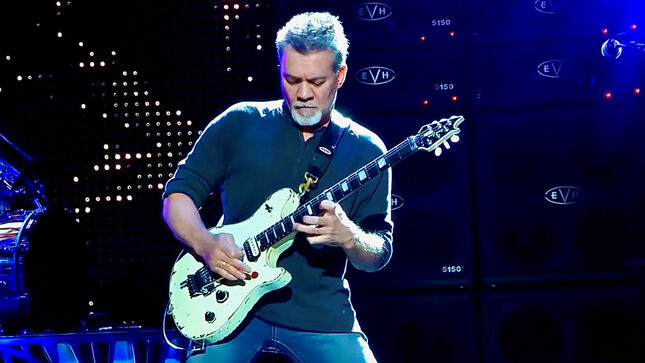 In a tale told to Guitar World’s Amit Sharma by Nickelback frontman Chad Kroeger for a forthcoming interview, Eddie Van Halen was a huge fan of Extreme guitarist Nuno Bettencourt, so much so that he used to play one of Bettencourt’s riffs regularly during Van Halen soundchecks. Bettencourt once linked up with Van Halen’s guitar tech, who was present when the Extreme virtuoso started reciting the riff to "He-Man Woman Hater" from the band's Pornograffitti album, released in 1990.

However, despite having been originally penned by Bettencourt, the guitar tech mistook it for an unrecorded, unreleased Van Halen track, owing to the fact Eddie used to play it at "every single soundcheck."

Kroeger: "(Bettencourt) told me this great story once. He was using Eddie Van Halen’s guitar tech when Van Halen were on downtime. He started playing 'He-Man Woman Hater' during soundcheck and the tech said, 'Oh, how do you know that riff? It’s a Van Halen riff that’s never been recorded!' And Nuno was like, 'What are you talking about?' And the tech said that Eddie used to play that song every single soundcheck. Nuno looked at him with his eyes lighting up and said, 'It’s our song and I wrote it, it’s called He-Man Woman Hater, and you just made my life!'"

"“The first time I met Eddie I was working on Dweezil Zappa’s album 1991’s Confessions), and he handed me his guitar and said, ‘You’ve gotta check out this pedal.’ And it’s like, ‘You want me to play while I check out this pedal?’ So now Eddie is leaning in front of me, dialing in stuff on his pedalboard. And what do you do when the alien who walked off the spaceship that changed your life is in front of you? What do you play? Like an idiot, I kicked into the solo from 'Get the Funk Out'. I became a cover of myself.

But the second I go into the tapping part, Eddie turns around and stops me. He goes, ‘Hey, hey, none of that silly stuff.’ That scared the shit out of me. It took me a minute and then I said to myself, ‘He knows who I am. He reads.’ Because at that time an article had just come out – it may have even been in Guitar World – and the interviewer asked about 'Get the Funk Out'. He said, ‘You’re doing tapping your own way.’ And I told him, ‘To be honest with you, I feel silly when I do tapping. Not because it’s embarrassing, but because it’s so Eddie.’ Later on, after I got comfortable around Eddie, I asked him, 'Did you read that article?' And he said, 'Yeah, I read that.' I was like, 'Wow, Eddie Van Halen read an interview I did!' Even that shit seemed impossible to me."