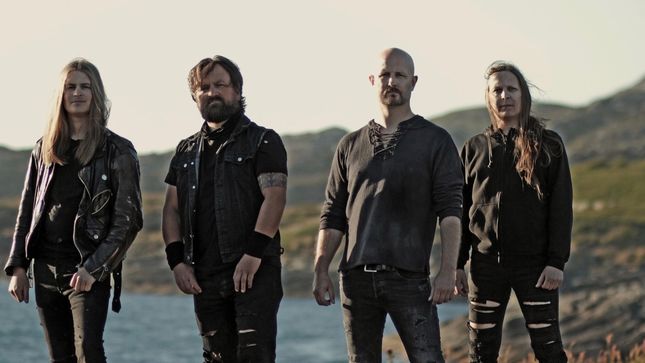 The legendary pioneers of Viking metal, Einherjer, have carried out their vision for more than two decades. The band was there when Norwegian extreme metal grew forth and took shape as an enormous cultural export. Only four years after their Norwegian Grammy-nominated masterpiece Av Oss, For Oss and two years after Dragons Of The North XX, the band comes back with a smasher.

Einherjer will release their ninth full-length, titled Norrøne Spor, on November 9th, and the song "Kill The Flame" from the upcoming release is available for streaming. Listen below, and pre-order the album here.

Einherjer’s Norse heritage is a phenomenon that reaches far beyond what one can hear alone. It is an amalgamation of the mystique and sagas of old, of songs and poems, of woodcutting and sword grinding and the vikings merciless way of life. It’s a cultural patchwork that fills the consciousness with the brutal majesty of the Nordic nature, the elemental strain, of mighty longships plowing the black seas to reach unknown shores. The wisdom of the gods and their Valhalla. Of cultural encounters and trade. Of violence and brutality. Of tough men in a tough time. Their hometown Haugesund also rings with historic sound, and from their own shores on the west coast of Norway the influence of the Vikings stretched towards the sea and the world beyond. The adventurers, pioneers, poets and craftsmen have inspired Einherjer to go their own way. The Vikings’ courage and boldness have inspired us to never compromise Einherjer’s vision: A vision that is a unique, self-made, original and modern interpretation of our mighty Nordic heritage.

The band’s vocalist & bassist, Frode Glesnes, has commented their upcoming album: “Classic Einherjer meets the future and the past! No, we have not returned to our roots! That's a way overused cliche and it always calls for bullshit! We have simply written and arranged more stuff together. On our last few albums we have written songs separately, this time we've looked at what happens when Gerhard & me are in a room together. We still have a firm grip on what Einherjer is all about. That will never change! Here is 10 new songs that any heathen metalhead should be able to love and appreciate. No bullshit, just 10 great metal songs!", and has continued about the single: “New Einherjer single! It always feels good to release something new, but this time we've fuckin' nailed it! Can't wait to present the whole album!”