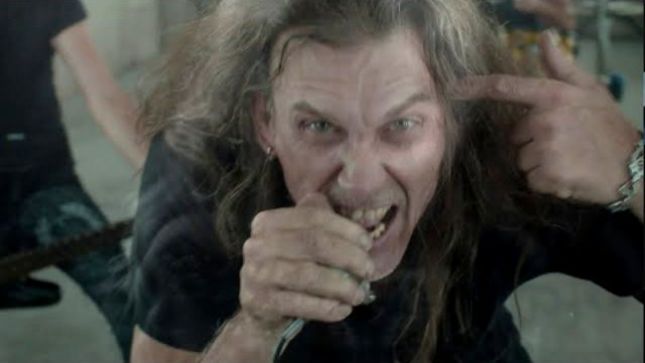 Episode 72 of The Chuck Shute podcast features Rick Ruhl, singer/songwriter from Every Mother's Nightmare. Rick has fronted EMN since 1987. The band had videos on MTV, tours with Cheap Trick and Van Halen, and even an appearance on the Joan Rivers Show. When the music scene changed Rick fell on hard times, but now he’s back with a new album, Resurrect The Faithful. The latest single, Breathe, currently has over 175,000 views on YouTube and both the new single and album are getting rave reviews.

Ruhl: "I met Blackie Lawless (W.A.S.P.), and he didn't like me for nothing. We played the Limelight with him, and he had 452 monitors with 215 and horns in them, and they were the loudest shit ever heard my life. I was just trying to get his monitor man to turn them down because they were so loud, and he wouldn't do that. And Blackie, he wouldn't do it. So, maybe I'm a little bit of redneck... I just poured them full water and turned them off for him."

Recorded at Supernova Sound Memphis, Resurrect The Faithful differs from any of its predecessors. With a unique wall of guitars and a thunderous rhythm section, Resurrect The Faithful stands above anything the band has written and crosses various musical boundaries. The lyrical content delves into profound subject matter that can be determined by the listener as it relates to their own lives and situations. Each song takes on a life of their own – 11 scorching tracks of pure rock ‘n roll bliss at its finest and perhaps the most defining record in the bands career.

Resurrect The Faithful may be a shock to many; including the 2020 re-record style of the hit "Love Can Make You Blind".

“Resurrect The Faithful is a true testament of everything that EMN is today,” says vocalist Rick Ruhl. “This is the best album of my career; it is perfect in every way – at least for us. There isn't a song on it that I wished I could go back and fix or do differently. All of these songs were written and recorded during some very dark times both personally and all around. Only the strong survive and EMN is still here.”

Bill Chavis President of HighVolMusic said, "Over the past five years, I’ve had the honor to establish a true friendship with Rick Ruhl and have a tremendous respect for him. I've learned where he's been, how he got there, how he fought back to save himself, his band, and his career. I was awestruck by his simple approach towards life, his industry experiences and in a way that has now inspired me in making some of my own decisions. The man is a true talent, a rock star and smarter than he will ever let on. No one knew what to expect when we signed our record deal but as a team we have set goals and conquered them. I have had the privilege of watching EMN roar back to life and here we are right now at this point in time. Resurrect The Faithful is by far the best album from EMN."

Here's To The Ones - A Documentary, is a tell all story in the making of the latest album Resurrect The Faithful by the American hard rock band Every Mother's Nightmare. The documentary will make its worldwide premiere September 27 on the Bravewords.com social networks.

Written by Bill Chavis, directed by Nick Hein and Bill Chavis, Here's To The Ones - A Documentary, is a project developed by HVM Entertainment in 2020 showing the behind the scenes look at the creation process of the band's most pivotal album of their career.

Filmed on location at Supernova Sound Memphis in Tennessee, the film shows the band discussing their demo, writing and recording processes for the new material as well as who and what EMN is as a band today.

Plans for release include a Roku release, a stand-alone DVD version packed full of additional footage, and never scene before live performances just in time for the holiday season.