ENEMY OF THE ENEMY Sign With WormHoleDeath, Announce New Album The Last Dance 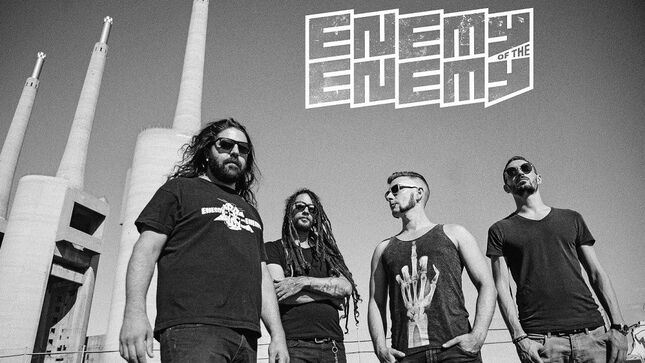 French heavy metal combo, Enemy Of The Enemy, have signed a licensing deal with Wormholedeath for their album, The Last Dance.

Says the band: "Enemy Of The Enemy is happy and honored to sign a deal with the Italian label WormHoleDeath for the upcoming album, The Last Dance, second album of the band and fifth production. We hope this is just the beginning of an adventure that will make Enemy Of The Enemy known by a larger public, we’re lucky to cross their way; to sign a disc-contract on these days is not common.

"The upcoming album The Last Dance is the result of several years of work, the main direction of Enemy Of The Enemy has always been the observation of the world we’re livin’, the human characters and the situations that makes us as humans, difficult spirits, with a lot of contradictions and also the consciousness of the Earth’s care; the ecology takes a huge part of the lyrics.

"With the help of WormHoleDeath and all the team, we know that the next album is going to be more powerful than ever, the art-pieces of The Last Dance are going to be  complete and we hope it will lead to a masterpiece."

"When The Sun Goes Down" video teaser: