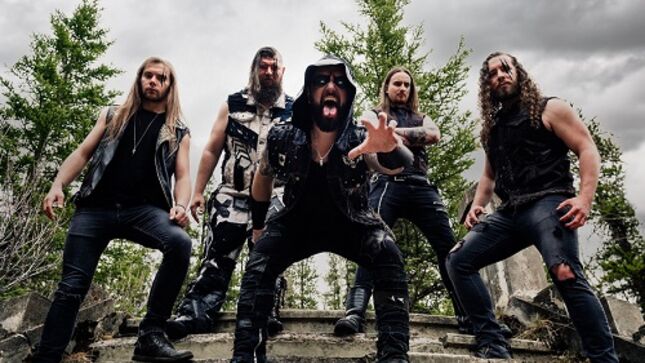 Canada’s Ravenous have announced that their third release Hubris is coming out this year and the first single “Die 1,000 Deaths” is out now, complete with both English and Japanese animated music videos.

“Hubris” is chock full of anthemic hits and this single may be the most fist-pumping one on the album. According to the band, the aim of the track is to give listeners the drive to break their limits and fight for every shred of glory in their lives - to always strive for the apex and conquer anything that stands in their way. Ravenous share their thoughts on the album:

“Take a journey with us to an arcade tower in Japan and experience the sensory overload equivalent to a Kaiju battle in an early-2000's anime. Die 1000 Deaths was Rav’s delirious and frantic output in the chemically imbalanced early days of the Covid-19 pandemic and underwent zero changes from its initial structure and tone. He based the lyrics off of Akuma - his favourite street fighter character - to properly represent the feeling and themes of the music. Try and stay calm as Akuma takes over your computer in the ‘Die 1000 Deaths’ video.”

This song is the perfect introduction to the album as it embodies everything the band wants to represent with the album. It’s fast, busy, symphonic, and tongue-in-cheek, featuring a whirlwind of riffs and breakdowns, three guitar solos (including a guest solo by Aether Realm guitarist Heinrich Yoshio), and was also recorded entirely in Japanese as an alternate bonus version.

Fast and frantic, the song can be coined as “very anime”, clearly inspired by Japanese Power Metal and following the Eastern Hirajoshi scale. Lyrically, the song is about a murderous figure that kills his master in pursuit of ultimate power. His only goal is to finally find a foe worthy of his full strength, and his hubris will kill all in his path in that pursuit.

“Die 1,000 Deaths” is best served with a sake bomb along with a spicy bowl of ramen and will be enjoyed by fans of Dragonforce, Galneryus, and Orden Ogan. BraveWords is premiering the video; check out both versions below:

Hubris will be released on October 22, 2021 via Feast Beast Records for North America plus Europe and for Asia via Spiritual Beast with exclusive bonus tracks. Preorders begin August 9 at Indiegogo .