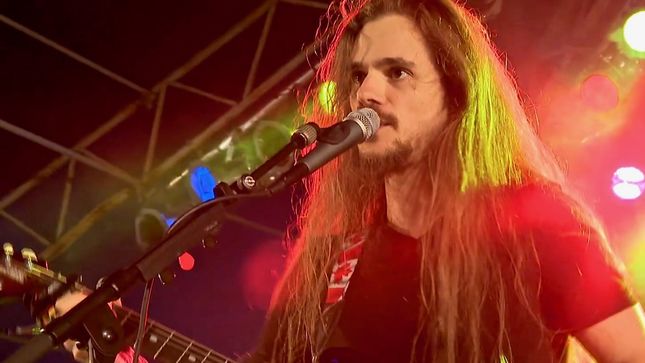 Returning from their performance at the metal holy land known as Wacken Open Air in Germany, Toronto’s melodic proggers, The Slyde, are sharing live video from the festival of their track "So Blind", which is off their latest album, Awakening.

The Slyde performed at the festival after winning the 2019 Wacken Metal Battle Canada competition and being selected to represent their home country at the Wacken Metal Battle international final. BraveWords is premiering the new live video, which can be seen below.

Vocalist/ guitarist Nathan Da Silva: “It was a real honour and pleasure to perform on the Holy Lands of Wacken. We made a lot of awesome friends and connected with a lot of bands in the Metal Battle. The festival does such an amazing job to keep all metalheads happy. We were also pleasantly surprised with how the weather held up this year, except for, ironically, during our soundcheck, where there was a 2-hour weather delay that forced us to cut two songs from our set. Despite these last-minute changes, we rocked the hardest we could and gave it our all. To say that we played the world’s biggest heavy metal festival means a lot to us. Thank you to all the organizers, judges and fans for making this possible. In addition, we have found even more drive to celebrate the 10 year anniversary of our band, with eight shows in September and October and new music and a music video to release in the next few months. ”

Now back on Canadian soil, The Slyde will be kicking off their 10 Years And Counting Tour to celebrate their 10 years of performing and recording their melodic prog rock since first forming in Ottawa, ON in 2009 to later re-locate permanently to Toronto, ON.