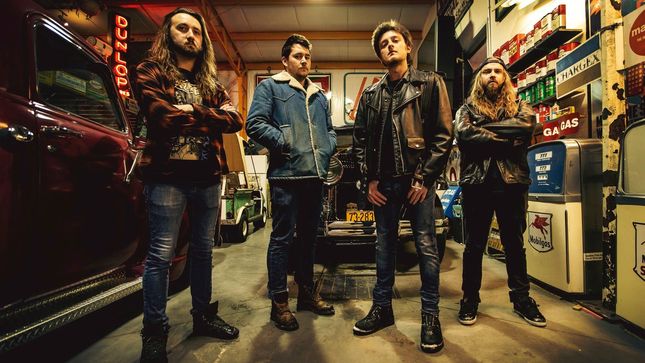 Edmonton’s Tymo have fleshed out a new single “Sanity Clause”, which is being premiered exclusively via BraveWords.

This single is the first release from the band since their 2017 album Purge And Reset and they are fired up to get this new single to ears. They quote with enthusiasm:

“We hope that people are as excited to hear what we’ve come up with as we are to put it out! We can never know for sure how people will respond to our music, but we’re excited to see what people think!”

Influenced by thrash heavyweights including Megadeth, Slayer and Municipal Waste, the single is their first that will depart from the melodic end of the metal spectrum exhibiting more speed, energy and technicality that is akin to the traditional thrash sound. In their own words:

“It’s a fast, skull crushing song, which tells the story of one not being able to escape their consciousness. When the obstacles in life become too hard, they take their own life only to realize it’s much worse in the afterlife and the consequences are worse.”

What started as a solo project for Tim Tymo evolved into a full-fledged band with the addition of Nick Schwartz, Harlen Jacobs and Marc Durie. They describe their sound eloquently by coining it as a ‘golden shower of thrash metal’ and citing that this single is a taste of what’s to come on the upcoming album the thrashers have chosen nine songs that they think will stand out the best and are stoked to be releasing them soon.

Metalheads get ready! This single comes out October 4, 2019 on all music platforms.