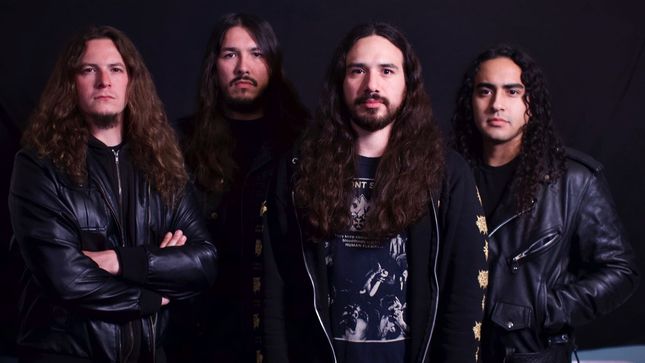 The sound of steel will ring out loud and proud once again this summer, as Exmortus return to the west coast this July for a series of headline shows. Hot off the heels of a couple of sold-out performances supporting EvilDead and the reformed Bonded By Blood in Pomona, and then Vio-Lence in Oakland the past two weekends, the death/thrash/shred quartet won’t stop. In addition to a couple of dates previously announced supporting Massacre in early July, Exmortus have extended their run with a slew of their own shows all over the west coast.

Exmortus are bringing out a couple of fine support acts of their own for these dates – Bay Area thrashers Hatriot (whose fourth album, The Vale Of Shadows, releases July 22nd on Massacre Records and features two sons of Exodus frontman Steve Souza), and Portland’s dark power metallers Silver Talon who are touring in support of Decadence And Decay, their debut full-length on M-Theory Audio, and who recently performed at Vancouver’s Hyperspace Festival and Chicago’s Legions Of Metal.

“We’re anxious to get back out and continue our traditional summer headlining run,” announces singer/guitarist Jadran “Conan” Gonzalez. “We just got out of the studio and we’re psyched to hit the road and bring a couple of great new bands with us.”

Exmortus recently finished recording, once again with Zack Ohren handling production and mix, for a yet-to-be named new label. It’s been some time since the band released a special Halloween-themed EP, Legions Of The Undead, in October 2019 and fans are clamoring for new music. The group hopes to have the first single out to coincide with these July shows.