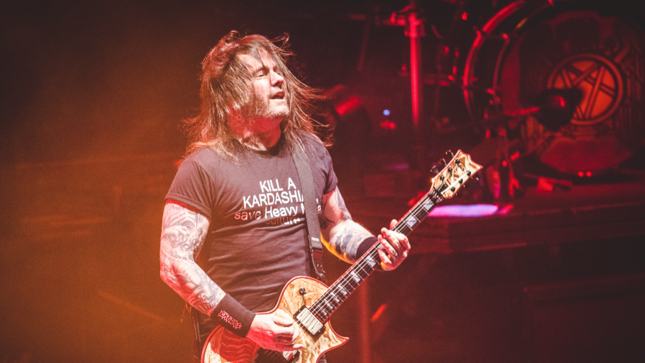 BraveWords caught up with legendary Exodus guitarist Gary Holt recently to discuss the band’s new album, Persona Non Grata, out now via Nuclear Blast Records. At the end of our conversation he talked about his near ten-year run with Slayer, which initially was intended to be a short-term fill-in gig for the ailing Jeff Hanneman who tragically ended up passing on May 2nd, 2013. Here’s an excerpt from the forthcoming major BraveWords feature:

BraveWords: A few weeks back it was the 30th anniversary of Slayer’s classic live album, A Decade Of Aggression and in the booklet there were two photos of Jeff Hanneman wearing a white Exodus t-shirt. Ever seen the photos? What kind of relationship did you have with Jeff? What did he mean to you?


Gary Holt: "Yeah, I've seen the photos. We hung out a lot, Jeff and I, back in the day. In those early days, those early tours. He's a really special guy. It meant the world to me, me filling in for him, and it was supposed to be a super short-term thing, a couple of months maybe, or a tour or two. I had his seal of approval on it because according to Catherine, his wife, he was bummed at first when he found out the band was going to use a fill-in, and then he asked her who it was and she told him it was me, and she said his answer was, 'Fuck yeah!', so that means everything to me. It's one of the fondest memories of Jeff I'll have and I wasn't there for it. Just knowing that he was excited about it. We hung out a lot back in those days and drank a lot, obviously. We had a good time."

BraveWords: How long did it take you to learn all that material to tour with Slayer?

Holt: "The first rehearsal I did, I played 17 songs. I just worked at home. They gave me a good amount of time, they gave me more time than Phil Demmel had when he had to fill in for me, that poor guy. But I went into Slayer not knowing any of the songs. I mean I knew some of the songs, but a lot of the material I wasn't familiar with. I'd heard them but I didn't have it buried in my head like a fan would, and not that I wasn't a fan, because I was. But your average fan off the street can hum all the guitar parts in the middle of ‘At Dawn They Sleep’. I could not, so I had to learn a lot of this stuff from scratch. I mainly really had to learn how they wrote, because I had to learn the scales they chose that work, rather than my own. Once I got around to that it became a lot easier."

Holt: "I learned a lot about how a major tour production is run. Other than that, I was playing guitar, and I already played guitar so I didn't learn anything from that. I learned that I had a lot of solos in Slayer. I didn't realize it going in, but some songs have three solos in that shit. It's kind of fun, I got to play almost a guitar hero role, my whole job was to go out and shred. But you see how it's done on that kind of level, and the professionalism in it was staggering. I tried to take that into my Exodus dealings."

BraveWords: I will never forget Tom (Araya) at the end of the Heavy Montréal show, just like every show. I'm like literally standing there in tears because it was the last time I was going to see you guys. You probably saw a lot of eyes that weren't dry with all those final shows. It must have been really heart-wrenching.

Holt: "Yeah. Every show on the final tour, Tom would really soak it all in. I'd go out and soak it in for a minute, but then I'd let him have the stage. The final show, I'm not going to lie, I was playing my final solo in ‘Angel Of Death’ with the guitar held by the whammy bar up above my head and I was fighting tears. It was an emotional time. And it's easy for me to forget I had just short of ten years in Slayer. What is that, a quarter of the band's history that I spent playing with them?  I tend to forget about that, how long it was and how much time I spent there. I've got mad love for that band and the organization. They treated me like family from day one, and we always will be, but now I'm back with family number one and that's where I belong."