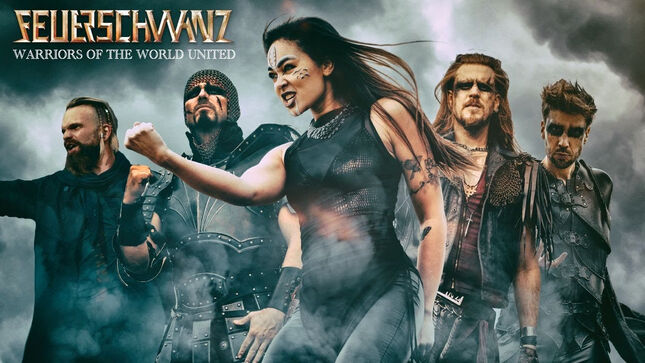 Germany's medieval folk rockers, Feuerschwanz, have already released two singles as an appetizer for their upcoming album, Memento Mori, out December 31. Today, they have shared an exclusive look at the contents of the Memento Mori bonus album, Die Glorreichen Sieben, by featuring an epic reissue of the Manowar anthem, "Warriors Of The World United", alongside a music video.

The brand new cover version promises great times. With an epic opening carried by deep bass and marching drums, "Warriors Of The World United" unleashes a mighty storm of blazing riffs, authentic medieval backing and the fantastic vocal collaboration of Hodi and the Hauptmann plus guest stars Thomas Winkler, Melissa Bonny and Saltatio Mortis. For the filming location of the reissue of Manowar's infamous metal anthem, Feuerschwanz headed to the ruins of a castle, hidden in the fog, where they called upon their fans to join their fearless army in front of impressive scenery.

Feuerschwanz on the new song: “It all started late at night when Hodi and Alea from Saltatio Mortis had a cold drink together. The two vocal warriors outed themselves as Manowar fans and decided that night that it would be truly epic to pay tribute to the legendary "Warriors of the World" for once - With bagpipes, hurdy-gurdy and a mighty choir of friendly bands and singers from the metal scene! Our friends and companions Thomas Winkler and Melissa Bonny were immediately on fire for the song, and so it became a real friendship project. By metal fans for metal fans! Brothers and sisters, gather under the dragon banner - Warriors Of The World United!”

Memento Mori, the follow-up to the successful album Das Elfte Gebot (#3 German charts), sings about great adventures, past battles and outstanding heroic deeds in typical Feuerschwanz fashion. Feuerschwanz manage to stay true to their trademarks, and at the same time, venture musically into new realms.