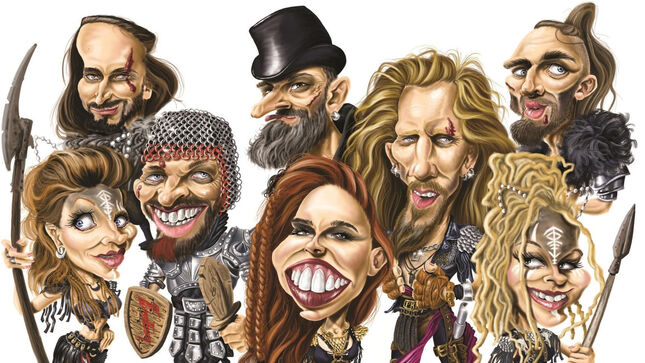 Following the success of their previous #1 charting album, Memento Mori, the hottest German band in folk rock to date are back to flabbergast their fans with the spectacular covers album, Todsünden, to be released December 30 - exactly one year after the release of Memento Mori - via Napalm Records. The album consists of two completely new songs, as well as the cover bonus tracks from their last two studio albums.

With their newest offering, they present an official music video for “Blinding Lights” - one of the biggest pop songs of the current decade by The Weeknd. Effortlessly combining their own style with the hot 80s revival sound of the 2020s, the song and video compare to a mischievous club night at the tavern. Pushing beyond all limitations, Feuerschwanz do not shy away from exploring the unexplored and humorously invite the listener into their world of pure medieval rock!

Hodi states: “A song from 2020, but with REALLY heavy 80s vibes. And all that, although I was born in 1990! This is really great songwriting that we have brought into the medieval and metal world. Bon Jovi with bagpipes. I always think of a vampire singing about the sun when I hear this song. ‘I can't sleep until i feel your touch.’”

Genre exploration and loads of fun aside, amidst it all, Feuerschwanz clearly showcase their musical skills and development, convincing with ultra-elaborate sound. In particular, vocalists Hauptmann and Hodi flex their deft skillset, from skyscraper 80s-style falsettos to deep growling and even rapping (as evident on their cover of Deichkind’s “Limit”). So jump on board this thrilling musical ride and witness Feuerschwanz conquering a kaleidoscope of musical styles with ease!

Proving their versatility with every single song on this album, Feuerschwanz overcome linguistic, musical and genre-specific limitations and unite the tavern in a sonic feast. Effortlessly combining different genres, the medieval folk rock geniuses reinterpret everything from pop to punk rock to metal hits without ever losing their own characteristic sound. From beloved evergreens like “Gimme! Gimme! Gimme!” to chart toppers like their latest release “Blinding Lights”, everyone will find their favorite. With humble support from icons like Melissa Bonny (Ad Infinitum), Saltatio Mortis, and Angus McSix, Todsünden is a musical spectacle beyond compare.

This exciting ride starts off with a cover of Swedish pop legends ABBA. Feuerschwanz give their world famous song “Gimme! Gimme! Gimme!” a folk rock vibe with a gloomy but still uplifting atmosphere bursting into heavy riffing and drumming. Another pop-tinged rock song of legend is covered with Europe‘s “The Final Countdown”, but the album also features current highlights like “Blinding Lights“, Ed Sheeran’s “I See Fire” and “Ding” by Seed featuring Ad Infinitum’s Melissa Bonny. Punk rock tracks like “The Bad Touch” by the glorious Bloodhound Gang or tracks by German bands like “Hier kommt Alex” by Die Toten Hosen or “Der Graf” by Die Ärzte – a track that Feuerschwanz honor with their very own trademark by telling ancient tales in their own fabulous way. Similar treatment is given to “Engel” by German legends Rammstein, as Feuerschwanz pick up the story and dress it in their own folkloristic gloomy sound, while in its new version, former European summer hit “Dragoesta Din Tei” throws the listener directly into a wild Viking party, releasing medieval power that will have them out of their seat in no time. In honor of the metal scene, Feuerschwanz present their very own version of Amon Amarth’s “Twilight of the Thunder God” but give it a new spin by turning it into a medieval hymn with 80s rock vibes. Other famous tracks include covers of Ghost’s “Square Hammer”, a turn at Powerwolf‘s “Amen and Attack” pumped with chanting violins, Sabaton’s “Gott Mit Uns”, and the all-time classic “Warriors of the World” by the one and only Manowar, which they present together with honorable guests Angus McSix, Saltatio Mortis and Melissa Bonny.

Todsünden will be available in the following formats:

The new tracks “Gimme! Gimme! Gimme!” and “The Final Countdown” will be available in the following formats: 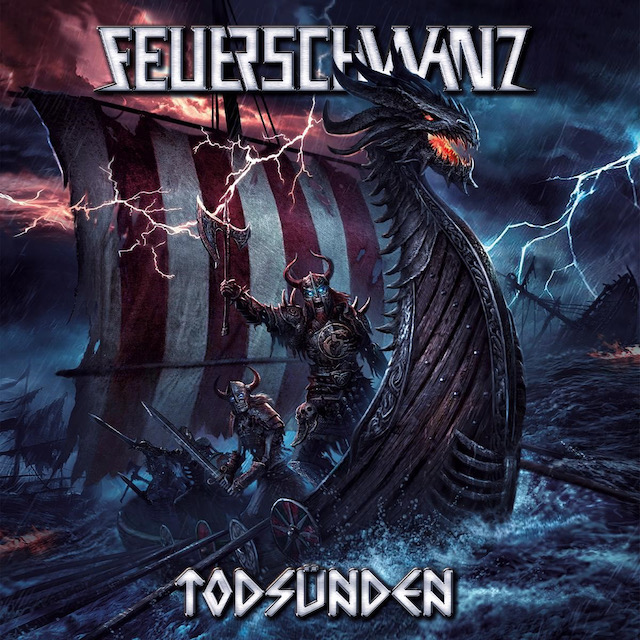