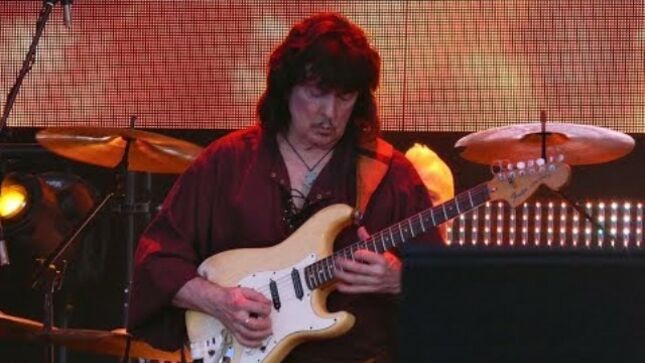 Music Radar has compiled a list of five songs written by guitar legend Ritchie Blackmore that guitarists need to hear. None of them are Deep Purple's "Smoke On The Water". Following is an excerpt from the rundown

Music Radar: "This live version of 'Space Truckin'' will take you through the wormhole. We can’t guarantee your safe return. Like many Deep Purple jams it has a deceptive groove. The verses ride along on the back of a steel-plated honky tonk blues guitar riff, all up-tempo momentum and a breezy psychedelic vibe that bottoms out with the super-sized chorus riff and Ian Gillan’s call to arms.

There are so many lessons to take from this. The first and most important one is of songwriting, and it instructs us that if you lay down a riff that’s simple over a groove that’s tight and infectious you’ll carry the audience with you. Just keep building and the release at the chorus is all the more liberating. It seems so simple, and Space Truckin’ is so simple for the audience, its magic easily digested, but listen to Blackmore’s guitar on subsequent verses; he switches up the groove, adding in some syncopated muted chords, heightening the energy in the song.

The studio version on Machine Head is perfect but let’s take the extended Made In Japan version as the gold standard. A great band playing live at the height of its powers… well, there’s nothing like it."

Music Radar: "Rainbow's 'Gates Of Babylon' picks up where 'Stargazer' left off on Rising, or at least it expands open the idea that rock and metal could assume the so-called exotic eastern scales and use the double harmonic scale (or Arabic or Gypsy major scale) to extricate itself from the blues-rock idiom, and make complete sense despite being in an alien environment tonally.

Of course, it’s painful leaving 'Stargazer' out; it’s at least as good a track, and is from the perfect metal album, but 'Gates Of Babylon' really foreground’s Blackmore’s guitar. It’s funny, just after leaving Deep Purple, a band in which Jon Lord’s genius at the Hammond organ was an awesome foil, Blackmore’s guitar would be complemented by a different kind of genius in the form of Ronnie James Dio’s voice. They were made for each other.

Check out Blackmore’s solo work here. It’s off-the-hook, and while it is attacked with a similar aggression and precision (the aggression always making sure that Blackmore’s technicality is never too clinical) it is a million miles away from his style on the likes of 'Mistreated' and 'Lazy'."