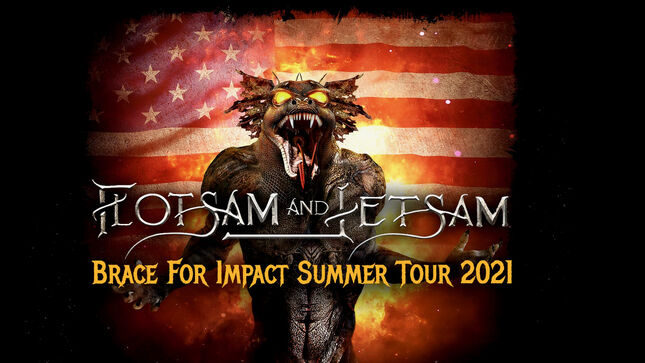 Arizona thrash and speed metal icons, Flotsam And Jetsam, have revealed a short run of tour dates for North America during August of this year.

Dubbed the "Brace For Impact Summer Tour 2021", the trek begins on August 17 at Albuquerque, New Mexico and wraps on August 28 in Mesa, Arizona. Find the full itinerary below. 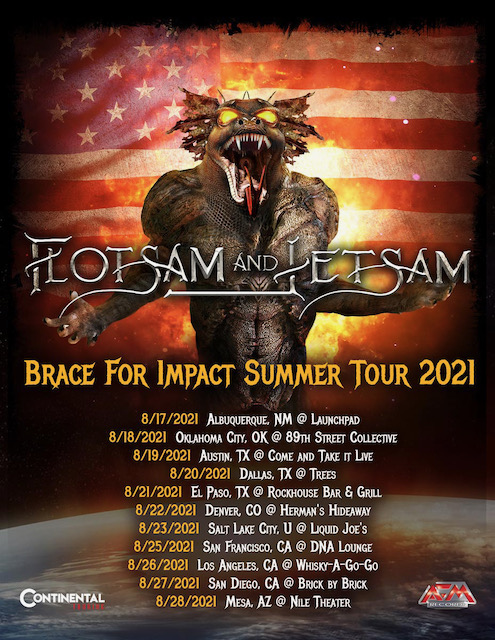 Flotsam And Jetsam frontman Eric "AK" Knutson recently spoke with BraveWords about the band's new album, Blood In The Water. Following is an excerpt from the chat, with Knutson commenting on the pressure of following up The End Of Chaos from 2017.

Knutson: "We were really worried about that when we started writing this record. We knew we had to top The End Of Chaos; otherwise, why bother even putting one out? That was in our heads when we started writing so I'm sure that had a lot to do with the intensity on this new one. When we started writing Blood In The Water, we started with leftover from The End Of Chaos that didn't make it to that record, and we didn't end up using any of them (laughs). This is all brand new stuff. But that's always how we usually start; by working on stuff we didn't work on hard enough for the previous record. Sometimes we use a couple of them, sometimes we don't, but this time not only did we not use any of the leftovers, we wrote 10 or 15 more songs that we didn't use. Music was just pouring out of (guitarists) Steve (Conley) and Mike (Gilbert)... it was ridiculous."

Flotsam And Jetsam have seen many of their peers that started at the same time, including Metallica, Megadeth, Slayer, and Venom have their day in the sun. Considered in metal circles as “legendary”, the mighty Flotsam And Jetsam, over their long career, has seemed somewhat plagued by label snafu’s, changes in trends, or other unfortunate events. On album number fourteen, and without a doubt making the best music of their career, Flotsam And Jetsam finally smells blood in the water this time around.

Blood In The Water literally shreds the listener’s ears and pummels Flotsam And Jetsam’s message into the hearts of the most diehard metal fans, the album must be heard to be believed. Featuring twelve brutal and powerful tracks that will rip your head off, the outstanding guitar work of Michael Gilbert and these killer vocals by Eric AK – one of the most gifted metal singers in music history – Flotsam And Jetsam's Blood In The Water will see the band deliver one of their heaviest records to date!

It’s been 35 years since Flotsam And Jetsam, formed in Phoenix, Arizona released their landmark debut, Doomsday For The Deceiver, the only album to ever receive a 6K rating from the influential British magazine Kerrang! Bassist Jason Newsted would jump ship to Metallica while the band released the unstoppable No Place For Disgrace in 1988. Cuatro (1992), Drift (1995), High (1997), and My God (2001) all still rank extremely high in heavy metal circles. But it was the first part of this unofficial trilogy in 2016’s self-titled Flotsam And Jetsam, followed by the the crushing 2019- successor, The End Of Chaos, that a certain rejuvenation and reset was clearly felt. Fast-forward five years to a planet that was forced to its knees: While spending most of the past year in a holding pattern like the rest of the world, Flotsam And Jetsam made the best of a struggling situation and just let those creative juices and angst flow. What emerged was twelve brand new blistering tracks under the moniker Blood In The Water.

“We really had a hell of a time figuring out which songs to actually include in this album, because we don’t feel we had any fillers,” describes Steve Conley about the new songs clocking in at nearly 55 minutes of thrashing glory.

Says singer Eric “AK” Knutson, “We’ve seen our fan base increasing, and we’ve seen the response to the last two albums getting louder and louder. We have some of the most committed and crazy fans in the world. We charted higher on our last album than at any point in our career. Maybe our career path will run similar to Motorhead’s, who although was always considered iconic, didn’t really break through in a big way until later in their career. We feel our time is now...” says AK. “We’re like that dog that’s been kicked...we’re ready to break the door down and take what’s ours.”

And the Flotsam lineup has never been stronger. AK keeps bringing the magic every album and tour, and oddly seems to be getting better and better as time goes on. He’s backed by the incredibly talented, exceptionally brilliant guitar duo of co-founder Michael Gilbert and Steve Conley, the powerful, precise and lightning fast engine of drummer Ken Mary, (whose Hall of Fame resume includes over five million albums sold with artists such as Alice Cooper, House Of Lords, and Accept), and the “fresh blood” and extraordinary technical skills and prowess of bassist Bill Bodily.

No filler, all killer, Blood In The Water was once again mixed and mastered by Jacob Hansen (U.D.O., Volbeat, Amaranthe, Powerwolf) and sees Flotsam And Jetsam exploding with creativity, moving forward but nodding to their past.

The band has come a long way from the kids that stepped onto the world stage with their first album in 1986, but the one thing that has never been in question since that day is their dedication to their fans, their incredible talent, and relentless pursuit to produce their best music ever.

“Following up The End Of Chaos was no easy task,” guitarist Michael Gilbert adds. “We weren’t really sure what we had left in the tank, as we put so much work, sweat, and blood into that album. As it turns out, we had plenty left to say. With everything that’s happened in the world, the friends we lost this last year, and not being able to perform or tour… you hear all of that in our music. It’s angry, it’s aggressive, and our emotions pour out all over this album.” 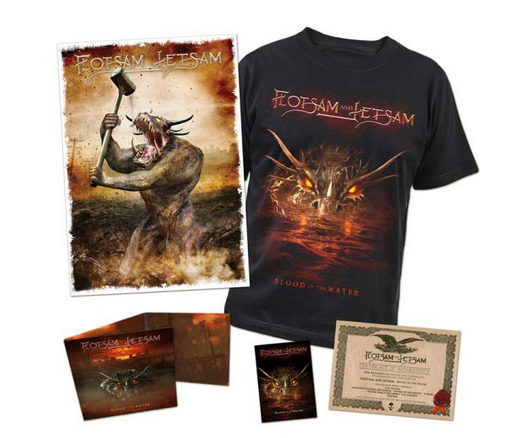 The AFM Records Store has a selection of vinyl and the following box set (shown above) limited to 666 units containing:

"Blood In The Water" lyric video: