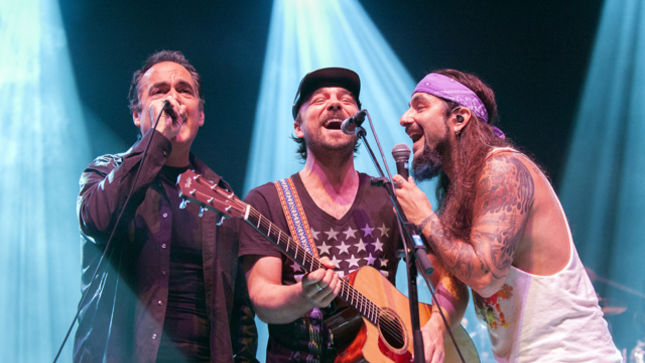 The mission was to join virtuoso players, a pop singer/songwriter, and the right producer—to create sophisticated music that was accessible. In 2009, executive producer Bill Evans brought the idea to Morse, Portnoy, Morse, LaRue, and music producer Peter Collins. Having helmed enduring works by progressive artists (Rush, Brian Wilson), as well as mainstream ones (Elton John, Bon Jovi), the renowned Collins was a perfect fit. The band was incomplete, though, even after Evans and Collins considered over 100 singer/songwriters.

Then Mike Portnoy, one night on tour, heard Casey McPherson’s “Colder Months” in rotation on his iPod. McPherson had recently released New Morning (Hollywood Records), dominating the Billboard Top-10 for 17 weeks, and VH1’s Top-20 Countdown for four months. Portnoy realized, soon followed by everyone else, that McPherson brought the perfect tone to Flying Colors.

Second Nature was released in September of 2014, debuting in multiple Top-10 charts, worldwide. In addition to numerous other accolades, the album received a Prog Award nomination for Album of the Year, with Flying Colors being nominated for Band of the Year. Adorned with artwork by Hugh Syme (Aerosmith, Stone Sour, Rush), mixed by prog rock stalwart Rich Mouser, and bookended by two tracks of truly epic stature—"Open Up Your Eyes", and the anthemic "Cosmic Symphony"—Second Nature was a fitting release for the band's sophomore outing.

In late 2012, the band toured the United States and Europe, dazzling fans with Flying Colors originals and selections from the catalogues of the five members. Second Flight: Live At The Z7 is the follow-up to the band’s previous Blu-ray/DVD, the #1 European-charting Live In Europe, which knocked One Direction out of the Top 10.