FM Drummer PETE JUPP Recalls Being On Tour With BON JOVI When Slippery When Wet Went To #1 - "It Was Just Lovely Being Around Them... They Were So Excited And Psyched About It" 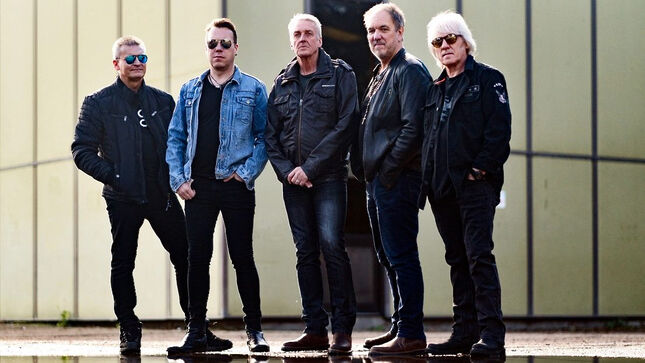 Pete Jupp, the drummer for British rock band FM, has recalled being on tour with Bon Jovi in late 1986 when the American group’s third album, Slippery When Wet, went to #1.

FM, these days regarded as an AOR act, supported the New Jersey giants in the UK during November 1986. Between the show at Mid-South Coliseum in Memphis on October 18 and he opening of the British tour at St George’s Hall in Bradford on November 7, the Bruce Fairbairn-produced album went to the top of the Billboard charts for the first time.

“We were lucky because on the Slippery When Wet tour … it’s when they first found out that Slippery When Wet had gone to #1 in the UK and America,” Jupp told the White Line Fever podcast. “It was just lovely being around them. They were so excited and psyched about it. They were a lovely bunch of guys, couldn’t have done any more for us.

“I remember there was one soundcheck we turned up at and they were all hungover. They’d been at a casino the night before and they’d taken a bit longer than they should have done sound checking. I remember the bass player (Alec John Such) held the door open. He said ‘we messed up, we’ll hold the doors for you’.

“The first gig we did on the tour was Bradford St George’s Hall and it was the first time we’ve ever been screamed at. There were girls screaming at us! I thought ‘this is weird’. No, that tour probably did us more good than any other tour we’ve ever done. It took us up a level overnight.”

It should be noted that while Slippery When Wet may have topped some UK charts that were around in 1986, its highest official UK chart position is recorded as #6.

Jupp reflects: “It was great fun but I actually don’t have any memorabilia at all. I remember giving my Slippery When Wet pass to my mate’s girlfriend because she was a mad Bon Jovi fan.“

The episode can be found on most podcast platforms here.