Former GUNS N' ROSES Drummer MATT SORUM - "I'm Swinging From The Chandelier, But Unfortunately It Comes Out Of The Ceiling" 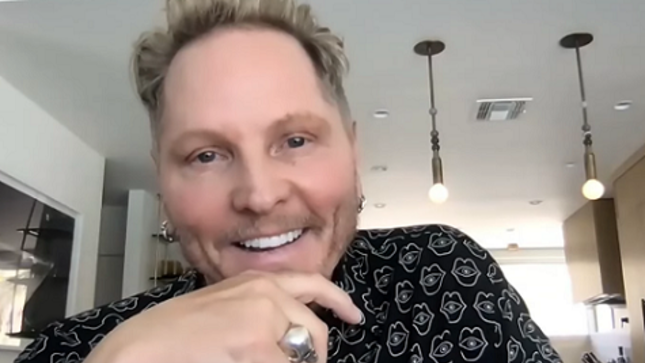 In the latest episode of AXS TV's "At Home And Social", which is available for streaming below, drummer Matt Sorum sits down with host Katie Daryl to discuss his autobiography, Double Talkin' Jive - True Rock Stories From The Drummer Of Guns N' Roses, The Cult, And Velvet Revolver, which will be released May 10th via Rare Bird.

One of the tales regaled by Sorum involves the age-old tradition of trashing hotel rooms, an excerpt has been transcribed as follows:

"There's another part of the book where I swing from the chandelier. I was watching Robin Hood - the very old one with Errol Flynn - and I had too much Jagermeister. The scene where he comes down the staircase and swings from the chandelier... I just remember thinking, I could do that. So, I ran across the room, and I catapaulted myself onto the chandelier."

"Back in the days of GN'R, we used to trade off on the presidential suite. So, certain towns we would pick. Like Minnesota was my family, so I'd get the big room. Axl would get it when he was in his home town, that kind of thing. So I'm swinging from the chandelier, but unfortunately it comes out of the ceiling and lands on top of me. I'm holding on to a bunch of pieces that had broken off, and the security comes up. In those days, we had fake names. My name was Dr. Canard Lingus. Anyway, they knock on my door, and they actually say, 'Dr. Lingus, you're disturbing Mr. Ernest Borgnine next door.' I'm like, 'Ernest Borgnine from The Poseidon Adventure! Are you kidding me?' And I ended up paying, that chandelier was something stupid like ten grand. There's a bunch of those fun stories."

In Double Talkin’ Jive (available May 10th) legendary drummer Matt Sorum takes music lovers behind the scenes of a remarkable life in rock. Sorum, whose albums have sold tens of millions of copies around the world, provides an honest, engaging account of the highs and lows of superstardom. Sorum recounts his childhood years idolizing Ringo Starr and surviving an abusive stepfather. After leaving high school, Sorum sold pot to get by. Over time, his drug dealing escalated to smuggling large quantities of cocaine, a career that came to a halt following a dramatic shoot-out. Sorum fled his old life and settled in Hollywood, where he’d enjoy a rapid ascension to rock ’n’ roll immortality. He caught his big break drumming for the Cult, and only a year later was invited to join Guns N’ Roses, with whom he’d record two of rock’s most iconic albums: Use Your Illusion I and II. 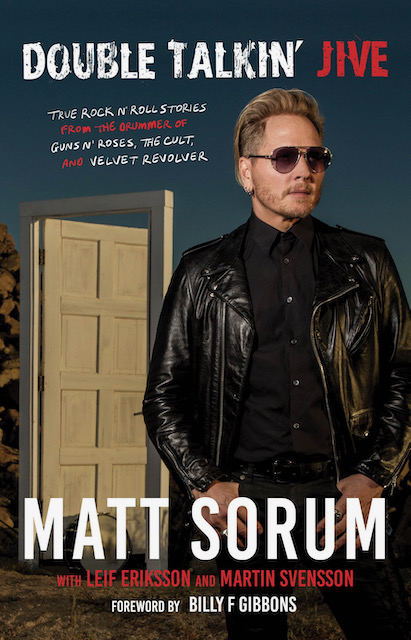 The Rock N’ Roll Hall of Fame inductee and Grammy Award winning Sorum opens up with forthright honesty, sharing anecdotes from his time touring the globe, battling drug and alcohol addiction, as well as working with Axl Rose, one of the greatest frontmen in rock, Slash and the rest of the GN'R team. His career with The Cult, Guns N’ Roses, Velvet Revolver, Motörhead, the Hollywood Vampires, and Kings Of Chaos costars an ensemble of rock royalty, from Billy Idol to Steven Tyler, Billy F Gibbons, and Alice Cooper.

Double Talkin’ Jive goes beyond the clichés of sex, drugs, and rock ’n’ roll, telling the very human story of what it takes to make it in music, and the toll stardom exacts from those who achieve success. Sorum invites fans to revel in the debauchery of the good times, but also paints a stark portrait of life after the party. Music fans of any generation will find value in the pages of this evocative, thoughtful, and candid autobiography.

“Matt lights up rooms, corridors, clubs, theaters, arenas, and stadiums with the kind of infectious rock ’n’ roll energy that is increasingly becoming obsolete. His dedication to his craft remains virtually peerless, and when the sticks are resting, you’ll have to go a long way to find someone cooler in rock ’n’ roll. Dive into these shenanigan-saturated pages immediately and find out for yourself!" — Lars Ulrich, Metallica

“A fun read. . . . all the essentials about Matt's rock ’n' roll success story are here. I found it particularly illuminating about his time in and relationships with Guns N’ Roses and negotiating all the personalities involved!” — Billy Idol

“Matt is a true journeyman drummer who’s got the chops and the showmanship to have a great career with all the ups, downs, and sideways that you would expect from a cat like him, though with his share of surprises he really needed to get his story told. Double Talkin’ Jive is his version of what it’s like to have ‘the best seat in the house’ with some of the wildest, hardest rockin’ bands to come down the pike.” — Joe Perry, Aerosmith

“Still alive and playing like hell . . . This is the stuff from which rock documentaries are made.” — Robin Zander, Cheap Trick

“I have witnessed the sheer power, drive, and determination of Matt from the outside for a long time now, as the drummer for the likes of the Cult, Guns N’ Roses, and Velvet Revolver, but I have also seen him from the inside when we have shared the stage as the Kings of Chaos. Always smiling, always ready, and as solid as Mt. Rushmore, you could say he’s one of the last of a dying breed, a big hitter who can also show restraint, the real deal.” — Joe Elliott, Def Leppard

“A colorfully dark look into the f * * * ed-up psyche of a legendary and badass drummer. I want to read it over and over.” — Jonas Åkerland, Film Director