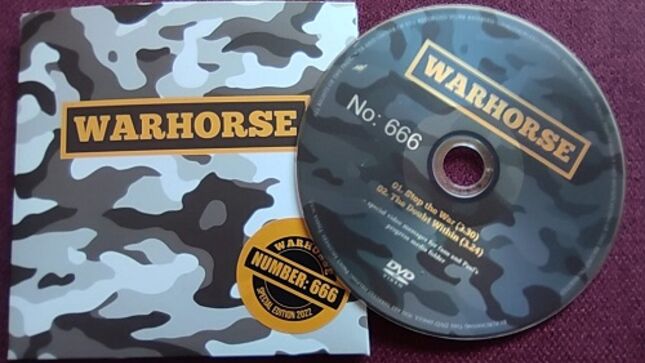 The DVD single of the hitherto unknown Croatian band Warhorse, in which former Iron Maiden frontman Paul Di'Anno is the singer, has sold over 500 copies since it was made available via pre-sale in May 2022. Fans have not yet heard the songs "Stop The War" and "The Doubt Within". The premiere will follow in mid-June when the long-awaited video for the single "Stop The War" will be released.

The bundle, featuring a Paul Di'Anno t-shirt, will be sold out very soon, as only 666 copies have been put on sale at maidencroatia.com/warhorse. Iron Maiden bassist Steve Harris, pictured below, is the proud owner of single number 111. Paul Di'Anno has put his personally autographed copy, number 666, up for auction that will symbolically start on Monday, June 6 at 6pm (Central European Summer time) at this location, and last until the end of the week.  All proceeds go entirely to the cost of treatment and upcoming surgeries of Paul Di’Anno.