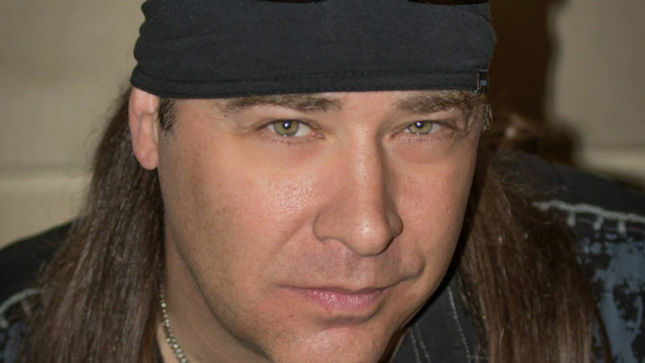 On the latest episode of the 80's Glam Metalcast, host Metal Mike catches up with former Manowar guitarist David Shankle. He talks about the bands he’s in involved with today - Feanor, Grave Reign, and Holy Tide. He also talks Manowar, guitars, and hot sauce. Check out the interview below.

Shankle was with Manowar from 1989–1994 and recorded one album with the band, The Triumph Of Steel, released in 1992.

On the new Feanor album, Power of The Chosen One, coming out April 23rd

Shankle: "Before Covid, I had gone overseas and toured twice with the band Feanor. The first time I ever toured with them, we played the entire Triumph of Steel album live. It went so well that I decided to join the group and do this new record, The Power of The Chosen One. This new Feanor album was just meant to be. This record is my part two to the Triumph of Steel that I never got to make because I wasn’t in the band to do another album. It’s not a copy by any means, but it’s my way of going back to my true metal roots. The albums all done and we are so happy with how it came out. I just keep moving forward. If people like what I do..great. If they don’t, then fuck off!"

On The Triumph of Steel album

Shankle: "There many people out there that love that album. Nothing against Ross The Boss, he helped start the band and a lot of people love the early classic Manowar albums. You have different generations of Manowar, they have been around a long time. And they are still going with this other guitar player.....whatever! Ross made his legacy in the band. When I came in, I made my legacy that no one can take away from Ross or me. Triumph of Steel was one of the first albums for Manowar to be in the top 10 in Germany when it came out. I wrote that album with Joey DeMaio and it went Gold and Platinum and I’m very proud of that. I will wear that on my shoulder until the day I die. My time in Manowar helped put me on the map, but things change."

On Manowar playing with a guitarist from a tribute band

Shankle: "They brought in the drummer from a Manowar tribute band. I thought he was a very good drummer and of course he knew all the songs. Then that awful thing happened with Karl Logan and everybody was asking 'Are they going to bring Ross back? They should bring back David!' Some people wanted us both back and play together, but Joey would never ever do that! Neither Ross nor myself ever got a call, e-mail, or text to discuss it. I have always said, I have nothing against Manowar. If they wanted to muster up the strength to give me call about coming back, I certainly would have listened. I heard they chose to go with the tribute guy by the urging of the new drummer, because the two of them had played together and he knew all the songs. A lot of fans gave this guy heat because they wanted Ross or me, or both of us. I heard an interview with Joey, where he said we have a new guitar player (E.V. Martel) and he’s a combination of Ross, David, and any other guitarists we’ve had. No, that’s not true! Don’t even try and put that guy in my world, or alone my hemisphere. No disrespect to that guy, but don’t even go there! I know that after the tribute drummer they had Anders Johansson from Hammerfall and Yngwie Malmsteen in there. I’m not sure if he’s still playing in the band or not. Why people come and go? Point your finger at the leader of the band I guess. It’s Joey’s band and he’s done very well for himself. Him and Eric fought hard to put Manowar on the map, so did Ross. God bless ‘em....but I move on with my different projects."