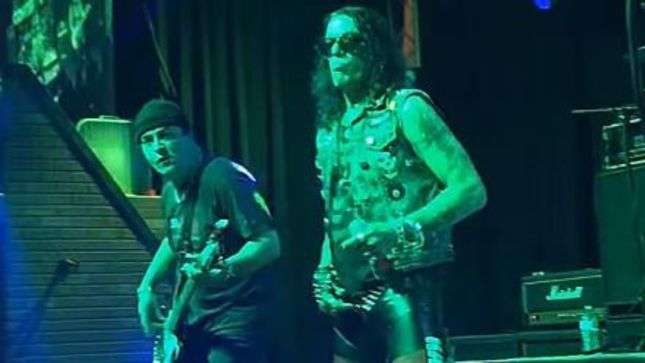 Word has come down that former Ratt bassist Juan Croucier and guitarist Carlos Cavazo will hit the stage with former Ratt frontman Stephen Pearcy at his October 30th headline show at the Rock N Skull festival in Joliet, IL. Pearcy and Croucier recently performed together at M15 in Corona, CA. fan-filmed video is available below.

On July 29th, three members of Ratt's classic lineup - Stephen Pearcy (vocals), Warren DeMartini (guitars) and Juan Croucier (bass) - reunited at former RIP magazine editor Lonn Friend's birthday party in Los Angeles. Also on hand were drummer Greg D'Angelo (ex-White Lion), who is a member of Pearcy's solo band, and guitarist Carlos Cavazo, who performed on Ratt's last studio album, Infestation, from 2010. Drummer Bobby Blotzer, who has been embroiled in lawsuits with his former bandmates over control of the Ratt name, was absent from the gathering. He is currently on the road with his own incarnation of Ratt.

Taking to Facebook, Stryper frontman Michael Sweet commented on the conflict between the two Ratt camps:

"I wish these guys all the best and hope they can resolve their issues. Ratt was a house band at Gazzarri's when Stryper was a house band. Blotzer wasn't in the band at the time and they were amazing. I used to chat with all of them back in the day and they were great guys. I think it's sad and unfortunate when a member of a band (who isn't really even an original, mind you) decides to drag the name and reputation of the band through the mud because he feels he has the right to do so. I'm looking forward to seeing/hearing what Ratt (NOT BB's version) does. One of my favorite bands from the 80's and here's to more..."

Pearcy recently guested on Episode 247 of One On One With Mitch Lafon. In the show's only interview, Pearcy talks about: his upcoming solo album Smash, recently singing alongside Judas Priest frontman Rob Halford, the Ratt album Dancing Undercover, and the recently released picture of him sitting along side Ratt bandmates Juan Croucier and Warren DeMartini. Was it simply a photo or was it a hint of things to come? "Never say never... the picture spoke a thousand words."

See the photograph in question, and listen to the audio interview below:

Earlier this year, bassist Juan Croucier was accused of using his ex-band’s trademark without permission. Blotzer and DeMartini are the only remaining shareholders in WBS (the corporation which owns the Ratt trademark). WBS claims Croucier formed his own band in 2015 called Juan Croucier’s Ratt’s and is intentionally infringing on their trademark in an effort to capitalize off of their band’s recognition.

According to the TRO application, Croucier has been using the Ratt mark on advertisements, websites, merchandise and marquees and has been “referring to himself as The Other Voice of RATT, even though he was never the lead singer.

Read more at the The Hollywood Reporter.