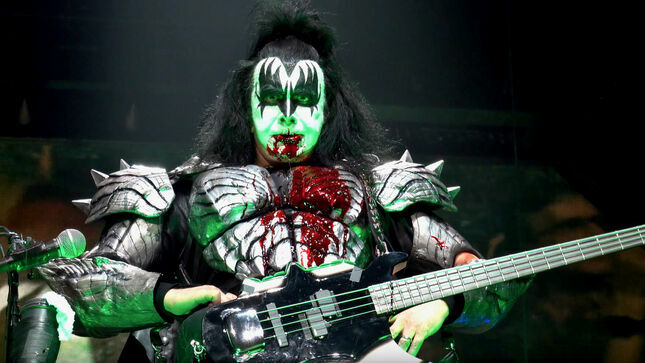 KISS bassist / vocalist and his wife Shannon Tweed recently announced they were selling their home in Beverly Hills, California and moving to Lake Tahoe, Nevada. Enterainment Tonight caught up with the couple, who offered a tour of their home. Check it out below.

On March 29th, Simmons appeared on KTLA 5 Morning News to speak about the decision he and his wife Shannon Tweed-Simmons made to sell their Beverly Hills home and move to Lake Tahoe.

According to Gene, "Our beautiful home in Beverly Hills on two acres, about 14,000 square feet, swimming pool, back rubs whenever you want — all the accoutrement, which is my French word of the day — we've loved this house and we've loved L.A. for so long. We've raised our two kids (Nick and Sophie), who've now moved on and bought their own homes in the Hollywood Hills. It's time for Shannon and I to move out of L.A. and California. So we're moving to Lake Tahoe, Nevada. In the meantime, it's a very sad but also a happy time. It's sad because we raised our kids in this gorgeous home, but it's also a happy time because it's the next phase. So no more celebrity tour buses at the front door, no more Hollywood star maps."

Elaborating further, Gene said: "A home, a house, it's more than property and all that — it's our home; it's where our kids are raised. And so I really hope the folks who buy this home are gonna get as much joy as we have in this. It's like graduating high school or maybe leaving home; you love your mom and dad, and at some point, you've gotta move on. This is the next phase."

"The taxes (in California) are just insurmountable," stated Simmons. "But for us, it's a tug of the heart. We bought a four-acre property over there (in Lake Tahoe). There's lots of land. There's 96 acres next door that I wanna buy. Just sort of a change of pace. Less of the hubbub. And no more traffic jams, no more earthquakes and no more fires. But, again, we love L.A. and love the home, but it's time for a change."