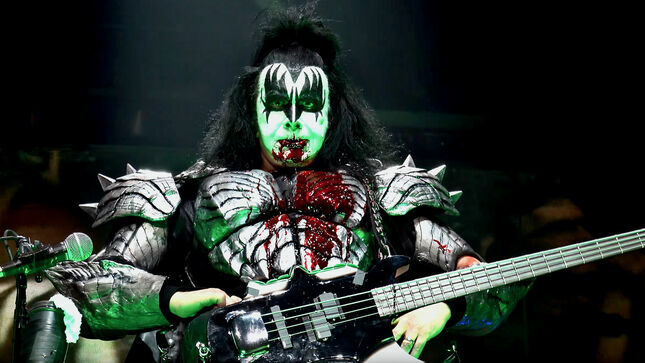 TMZ caught up with KISS icon Gene Simmons and asked for his thoughts on bands still on the fence when it comes to going ahead with their Russian concerts while the country's attacks on the Ukraine continue. Check out the clip below.

The members of Deep Purple have spoken out in regards to the current situation between Russia and Ukraine. The band have shared the following:

"As a rule, Deep Purple is apolitical, but on this occasion..."

Words of Roger Glover: "Like many performers, we have occasionally performed private concerts for fans in various countries. We are an apolitical band and in no way, was our intention ever political. It was music. These days are different. We condemn Putin's military for the atrocities to innocent men, women and children in Ukraine. and we apologize to our Russian and Ukrainian fans that the shows have been cancelled. We live in hope that we can fulfill those dates in the future." - RG

Words of Don Airey: "Watching the news that Russian missiles have just destroyed the Opera House in Freedom Square Kharkiv, where DP played almost exactly 20 years ago, memorable for Ian Gillan donning a tutu he found in a dressing room cupboard and proclaiming himself “Deep Purple in Frock”, for the gear arriving at 7pm and somehow the show starting at 8pm, for an old apparatchik single-handedly trying to make the young audience sit back down during the set with such zeal that he had a seizure, and next day on the way back to the airport my asking about a statue ”Is that Lenin?”, Roger Glover replying, “Well it’s definitely not McCartney”. A different day today I have just written to Dmitri Medvedev, former President and now head of the Russian Security Council, returning the autograph he gave me at the dinner for Deep Purple at the Gorky Palace in March 2011, in protest at his various statements post invasion." - DA

Words of Ian Gillan: "If speaking out means we shall never see our Russian friends again, then that is a big sacrifice, but nothing compared with never again seeing our Ukrainian friends who are being killed to satisfy the psychopathic ambitions of the Russian leader. I would like to see Russians on the streets in their millions, to show their disgust at the Ukrainian invasion, and I’d like to dream that very quickly, Russia can find some modern leadership that will bring them back into the world as friends. We have so much in common." - IG

Words of Ian Paice: "What’s happening is beyond distressing. It’s criminal and should be treated as such. The invasion of Putin’s army into Ukraine, (because that’s what it is), I hope will turn out to bring his ultimate downfall. And that someone who is “functioning mentally in the 21st century”, can lead the Russian people back into the fold." - IP

Words of Steve Morse: "I've always thought music should be non-political, and cross every border as the universal language. As a citizen of a deeply divided country, one thing here that everybody agrees on is: Stop this attack on a Country who voluntarily disarmed their nukes to satisfy all the big players. Stop, lower your guns, turn back, help others on the way back! - " SM