GENE SIMMONS Talks Early Songwriting - "The First Songs I Wrote Were The Kind Of Things JOHN LENNON And PAUL McCARTNEY Wrote, But I Don't Mean Anywhere Near As Good" 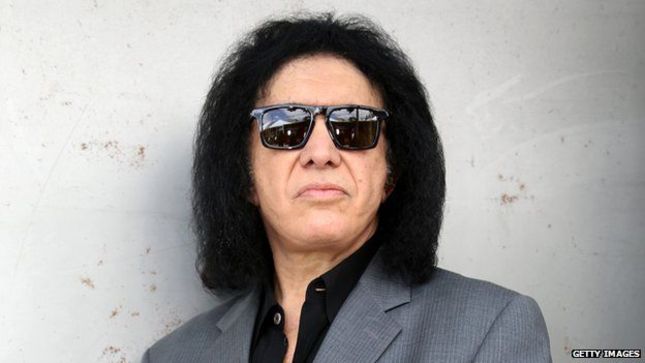 In a new interview with Rock Cellar magazine, KISS icon Gene Simmons discusses career endurance, KISS' legacy, and The Beatles' Paul McCartney’s influence on him. An excerpt from the interview is available below.

Q: How would you describe the early songs you wrote?

Gene Simmons: "The first songs, in retrospect, were the kind of things John Lennon and Paul McCartney wrote — but I don’t mean anywhere near as good. People would ask them what their words mean and both of them would say, 'We have no idea, we just out words on there that sounded good.' And initially, the kinds of songs that I wrote as a kid didn’t really mean a hell of a lot. I had a song called 'My Uncle Is A Raft'. One of the lyrics was 'My uncle is a raft and he always keeps me floating.'

I had fond feelings about my uncle George and I’m sure all that McCartney stuff like 'Uncle Albert' and the lyrics 'hands across the water' really don’t mean anything. It’s not like 'Penny Lane', which really meant something about his childhood memories. But a lot of the words in Beatles songs like 'I Am The Walrus' don’t mean a lot; they’re just interesting words that are stuck against the melody and the meter. So those first few songs of mine were very simple. Stylistically, they were vaguely Beatlesque or Everly Brothers-ish, 'Wake Up Little Susie', that kind of stuff."

Q: What was the breakthrough for you as a songwriter?

There’s no vocal histrionics on it but I noticed everybody as looking for a bass player because there were plenty of guitar players and plenty of drummers. So I could play a little guitar. My mother bought me a Kent bass, a bass which looked like a Hofner, the one Paul McCartney played in The Beatles, but of course it was a cheap version made in Japan. Bands immediately wanted me to join their group because they didn’t have a bass player and because I knew chords, if someone said, 'Play an A or B or G,' I knew where they were on the fretboard.

So I immediately joined bands. The first band I joined might have been the Missing Lynx and then I really hit my stride with a group called the Long Island Sounds and then after that we had a group called Cathedral which had a Hammond B-3 organ. By that time I’d been starting to write my own songs or co-writing songs. One of the early ones was a song called 'She', which KISS later recorded for the Dressed to Kill album. I wrote that with the guitar player in one of my bands, Stephen Coronel; I used to go to school with him. That song and a few others including 'Goin’ Blind', which was initially titled 'Little Lady', wound up being recorded by KISS."