GENE SIMMONS Talks New KISS Album - "Paul May Think There's Not Going To Be Another Record; I Suspect There Will Be" 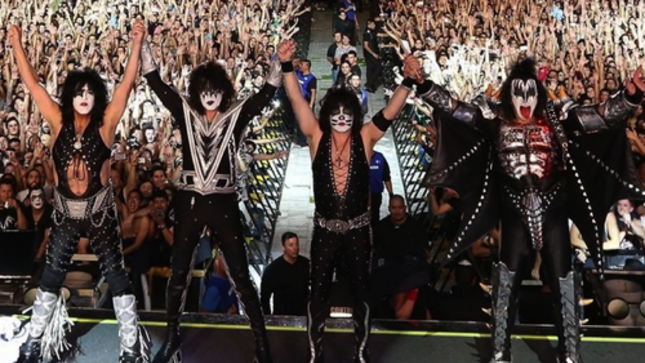 KISS legend Gene Simmons is featured in a new interview with The Press Enterprise discussing the band's acoustic shows, the band's rapport with the fans, and the possibility of new music. An excerpt is available below:

Q: What is it about the music and what you guys have done that has created this deep connection with fans? People are still painting their faces to this day and now even getting new generations involved.

A: "You got it. The coolest thing of all is when a five year old discovers KISS for the first time. That is something that is more than just band and fan. It’s a beginning of a relationship. Our songs are used in weddings. Our fans tattoo our faces on their bodies. They have KISS conventions and tribute bands."

Q: Any chance that KISS will be working on new material soon?

A: "Paul (Stanley) may think there’s not going to be another record; I suspect there will be. We never force the issue. There is no one to answer to except our own gut. I recently wrote a song called ‘Your Wish is My Command’ and it feels like KISS. It came out pretty easy. When there’s enough material, we’ll look at each other and say 'you wanna?'"

KISS and the biggest sporting club in Australia, the Collingwood Football Club, have announced they have teamed up to produce a very special, one-off commemorative T-shirt – The KISS Magpie Army. This collector’s item has been produced to celebrate the iconic band’s return to Australia in October to perform for the KISS Army as part of their 40th anniversary world tour.

It’s no secret KISS has had a love affair with Australia which goes back to their very first visit 35 years ago. The band loves being here and was keen to offer fans a fun Australian-specific item of merchandise to mark this special anniversary tour. But what?

In August 2013 Paul Stanley and Gene Simmons became co-founding partners of the only football team of any kind in the greater Los Angeles area – LA KISS. The team is part of the US Arena Football League. Suffice to say Stanley and Simmons are huge football fans and so an alignment with the biggest football club in Australia seemed the perfect fit.

This amazing T-shirt features incredibly detailed drawings of the four iconic KISS faces on the front with the KISS and Collingwood FC logos, while the back is emblazoned with the words KISS Magpie Army.

This one-off collector’s item – which is a combined KISS, Collingwood Football Club and AFL promotion - is sure to be hugely popular with both the KISS Army and avid Magpie supporters.

The T-shirt is available for purchase for a strictly limited time period from Thursday July 16th at 9.00pm until Friday October 2nd through both the KISS and Collingwood Football Club websites.

KISS arrives in early October for a two-song performance on the Grand Final Footy Show live from Rod Laver Arena before heading to Perth to begin their Australian tour.