GENE SIMMONS To KANYE WEST - "Love The Mother Of Your Kids And Let Her Make Her Own Decisions, She's A Grown-Ass Woman"; Video 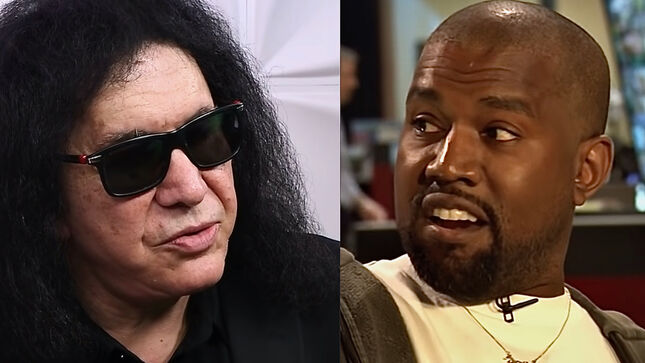 Who better to offer advice to rap icon, Kanye West, than Gene Simmons? Perhaps that's what TMZ was thinking when they fronted the KISS legend on Thursday, and asked for his opinion on the West / Kim Kardashian / Pete Davidson situation. Watch video below.

Says TMZ: "Gene Simmons says Kanye West needs to man up and back off Kim Kardashian and Pete Davidson... and he thinks a bitch slap might just be the wake-up call Kanye needs.

"We got the KISS rocker Thursday at Kings Road Cafe and gauged his opinion on Kanye's repeated online attacks aimed at his estranged wife and her new boyfriend, and Ye's behavior since the divorce. Gene says Kanye needs to get a hobby other than obsessing over Kim and Pete... and he suggests a slap to the face to set Kanye straight.

"What's more, Gene finds it pretty childish for Kanye to be waltzing around in Miami with a new girl who just so happens to look like Kim ... and he's got a message for Chaney Jones too."