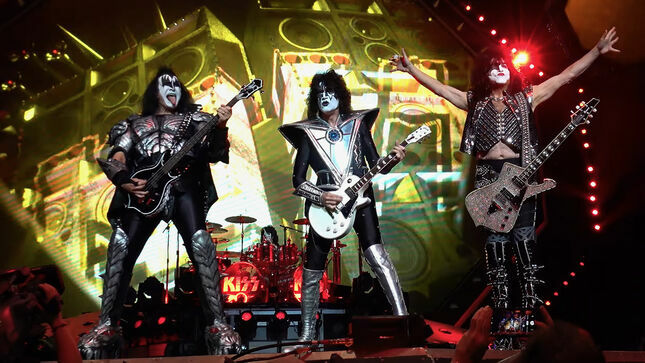 KISS icon Gene Simmons is the featured guest on Episode 660 of Dean Delray's Let There Be Talk podcast, which can be heard below. During the interview, Simmons discusses the band's ongoing End Of The Road farewell tour, as well as the possibility of KISS continuing on in the future.

Simmons: "When it's the last show, it'll be the last show. KISS the touring band will stop, but the touring band... KISS will continue in other ways. I have no problems with four deserving 20-year-olds sticking the makeup back on and hiding their identity. KISS will continue in ways that even I haven't thought of, but I can conceive of... you know, the Blue Man Group and 'Phantom Of The Opera' tours around the world with different personnel. There could and should be a KISS show, kind of live on stage with effects and everything else, but also semi-autobiographical thing about four knuckleheads off the streets of New York that ends with the last third as a full-blown celebration, a full-on performance. Not with us, although not a problem stepping in every once in a while."

KISS has published the official music video for “Crazy Crazy Nights” on YouTube. The video and opening track to their 1987 album Crazy Nights had previously been unavailable online. With the lineup of Paul Stanley, Gene Simmons, Bruce Kulick, and Eric Carr, step into the time capsule and enjoy a slice of the unmasked era of KISS:

Produced by Ron Nevison, Crazy Nights would reach #18 and #21 on the U.S. and Canada charts, respectively. The album has achieved platinum status in the U.S., Canada and gold certification in the U.K. and Finland.

KISS will next head down to Australia for a string of shows in late August. Find the band’s tour schedule at kissonline.com/tour.