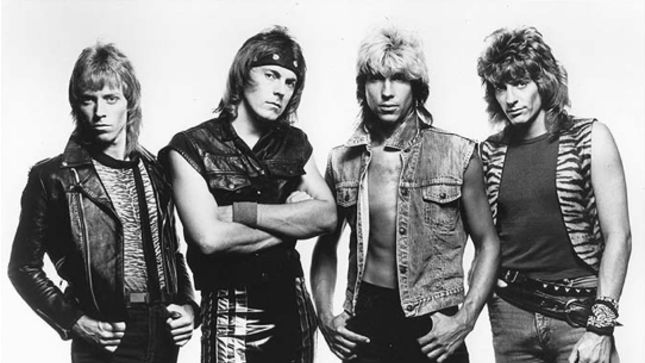 On recent episodes of The Classic Metal Show, guitarist George Lynch and vocalist Don Dokken traded barbs regarding their debut release in Dokken, Breaking The Chains.

On the December 6th edition of the show, Lynch was asked about which album he wishes he could take out of his catalog, to which he answered Breaking The Chains. Below is what Lynch had to say:

GL: "I was going to say Breaking The Chains, quite honestly."

Classic Metal Show: Really? You don't like Breaking The Chains?

GL: "I did like it when we originally recorded it, but then (Don) Dokken got ahold of it and destroyed it. He basically sent us home from Europe and said, "OK guys, we're done. I'm just going to stay back and hang out with my girlfriend." I was thinking, "OK."  What he did was he stayed in the studio when we were gone and had his way with the record, which was

(to) pump up all the vocals, take all my guitars out. Destroy the mix. It just sounded weak and wimpy. It just killed it. It was actually pretty muscular and pretty tough when we were in the studio. It was down in the basement at Dierk's studio in Germany. The Scorpions were upstairs. Rory Gallagher was upstairs. These guys wanted to hear what was going on, so

they would bring down the guitar player from Scorpions and Rory. They would sit there. I was so proud of my guitar tracks. Me and Michael Wagoner were holed up there. We'd board the place up. We wouldn't let anybody in. I had a 24 track tube machine and an MC500 board. I had one of Richie Blackmore's old cabinets and a Rangemaster treble booster and my Tiger guitar. It sounded so good. It was the first record I'd ever done, really, so we were committed to making a statement. Quite honestly, the sound was just unbelievable. Then when it was all done, he did what he did to it and he killed it. It's very hard for me to listen to because of that, because I knew what it was and nobody will ever hear that unfortunately."

Vocalist Don Dokken appeared on January 3rd edition of The Classic Metal Show, and was asked about Lynch's claims that Don stayed behind and remixed the record behind his back. Don's response is below:

Classic Metal Show: We talked to George (Lynch) a month ago, and he said that with Breaking The Chains, you stayed behind in Germany and remixed the record behind his back.

DD: "That's a typical George Lynch statement. No, it wasn't Bob (Ludwig, engineer). I love that he says, "behind his back". I guess George forgot that when we did Breaking The Chains, he wasn't in the band. For the record... George... what is he smoking? He must be smoking something.  When I did Breaking The Chains, it was a solo record deal. George was not in the band. Mick was not in the band. Juan Crocier's picture is on the album, but he didn't play on it. Peter Baltes did because Juan missed the deadline to get to Germany. I had Peter play the bass tracks. It was a solo album, and the album came out originally in Germany, and it was called "Don Dokken Breaking The Chains". I have a copy. It's a picture of me on the cover and it says "Don Dokken". Now, George... I asked him to be in the band. He said no. I asked Mick if he wanted to be in the band. He said no. They were going to do something else. They were going to do Exciter. So for him to

say "behind our back", he was paid $2500 to play on the record and that's it. He had nothing to do with Dokken. He wasn't in the band. He'd just come to Germany. We did a little tour. I paid him. He went back. He thought he was going to join Ozzy. That didn't work out. So he basically had nowhere to go, no band, and he was broke. That;'s when he came back and said, "I want to be in the band", because Mick had decided to come and play with me. To say that I did anything "behind his back", I don't know what that means because he wasn't in the band. He had nothing to do with Dokken. The guy is high."

The Classic Metal Show is heard live Saturdays from 9 PM to 3 AM, EST at this location.