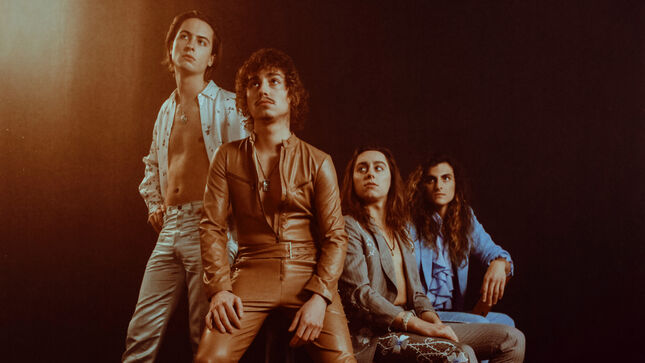 All four members of Greta Van Fleet recently participated in an online Q&A with Gary Spivack from Offstage with DWP, the complete interview can be viewed below.

Greta Van Fleet have unveiled a live video for “Heat Above” the latest track from their sophomore LP, The Battle At Garden’s Gate, available now via Lava/Republic.

“‘Heat Above’ is theatrical, eloquent, and exaggerated,” explains the group. “This is a dream in the clouds, a moment of peace in the storm. Thematically, we are dead center in the cult of Heaven, surreal, strange, alive and free.”

Greta Van Fleet are debuting their latest track, "Broken Bells”, an anthem intended to inspire; listen/share here, and below.

“'Broken Bells' is what the fetter of society does to impact a pure and innocent soul. Our intention is to remove the obligation of generational synthetic expectations; break down these walls and not build new ones,” explains the band’s Sam Kiszka.

The track is from the group’s new LP, The Battle At Garden’s Gate, released April 16th via Lava/Republic. It follows previously released album tracks “My Way, Soon” (the band’s fifth #1 single at Active Rock,) “Heat Above” and “Age Of Machine”.

The band's new album, The Battle At Garden's Gate, is a reflection of their journey into the present. With string orchestras, explorative songs, and the band building a visual story with every track, it has an elevated elegance unseen yet from the young band. It explores the boundaries of the group's artistry, with physical copies of the record featuring a stunning 16-page booklet full of mythical, transcendent visuals and metaphysical symbols for each track.

In three years, Greta Van Fleet - Josh Kiszka/vocals, Jake Kiszka/guitars, Sam Kiszka/bass and keys, and Danny Wagner/drums - went from touring the grimy rock bars of Detroit and Saginaw to headlining shows on five continents with audiences triple their hometown's population. The band that once attracted crowds of teens to improvised forest concerts, have now sold over one million tickets worldwide.

The twelve songs and symbols on The Battle At Garden's Gate were revealed this week and touch upon themes of freedom, self-empowerment, power in community, and respect for Mother Earth.

“Heat Above”
“My Way, Soon”
“Broken Bells”
“Built By Nations”
“Age Of Machine”
“Tears Of Rain”
“Stardust Chords”
“Light My Love”
“Caravel”
“The Barbarians”
“Trip The Light Fantastic”
“The Weight Of Dreams”