Guitarist CRAIG GOLDY Looks Back On Joining DIO, Writing For Dream Evil Album - "We Only Had Six Rehearsals Before My First Gig With The Band" 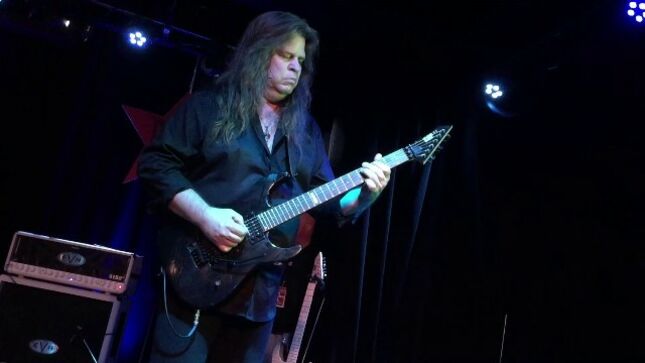 In the latest episode of the 80's Glam Metalcast, host Metal Mike catches up with  former Dio guitarist, Craig Goldy. They go in-depth about his time in Dio, his friendship with Ronnie, their songwriting process, and much more.

Goldy: "That was birthed during the demo recordings for Rough Cutt, that Ronnie was producing. The two of us just liked hanging out together. There were so many times it was just the two of us at his home watching old Rainbow videos. It would get too late, and he would bring out a mattress, pillows, blankets and tuck me in like a father to a child. Then he would bring me headphones so I could listen to the Holy Diver album before it was even released. We would work late at Sound City Studio. One thing that happened there is Ronnie made a promise to me that if things didn’t work out with Vivian (Campbell), that I would be his first choice. He was impressed how easy and wonderful it was to work together.

Once I was in, we only had six rehearsals before my first gig with the band. He knew that I knew the songs. I just needed to learn all the little changes they would make to the songs live. The whole thing was surreal from top to bottom. Headlining stage, 20,000 seat arenas... I didn’t know what to do with myself at first. I was used to being an opening act, now it was like I had a city block to run around in. When it came to playing Vivian’s solos, I wanted people to know that I could play his solos. They were basically note for note, but I would fudge them a bit to be respectful and so I could move around on stage while I was playing them."

On the writing for Dream Evil

Goldy: "We knew we could write together, because we had to rewrite some parts for Rough Cutt that weren’t working. Jimmy (Bain) and Ronnie would usually start the writing process together, but Jimmy was pretty bummed out because he was so close with Vivian. Ronnie called me and said, 'Jimmy isn’t really into this right now, so you’re up kid.' So him and I just went through our cassettes and picked out all the song ideas we liked. The Rainbow vibes on this one were coming from both of us. I just come from the Blackmore school of guitar. Ronnie was on board because it was part of his history. He could have said no, but he liked it because it was reminiscent of, not a copy. I thought the riff for 'Man On The Silver Mountain' was so cool, that I wanted to surprise Ronnie with one of my own for the song 'Dream Evil'. He was like, 'That’s a riff!' He said he always wanted one like that for his own. The whole album has a Blackmore vibe, that’s why I wanted a keyboard solo on 'All The Fools Sailed Away'. Ronnie was like, “Are you sure about this Goldy”? That one was the first epic we wrote together."

Goldy: "Someday I’ll tell that story. I’ll tell you what it wasn’t. It wasn’t like, 'Thanks Ronnie, I’m going off to have a solo career.' I had no intention of leaving whatsoever. Something happened that we eventually got over and that’s why he asked me back. I know what I did wrong and what I did right. I know what he did wrong and what he did right. I will tell it someday and it will be just answering the question, not taking potshots at a dead man. It ran deep. It’s still a mystery to most fans."

His thoughts on his replacements and getting back in the band

Goldy: "I thought Rowan Robertson was amazing! I was almost jealous, because Ronnie told me for our second album together, he was going to let me go wild. He thought he was holding me back, because he knew what I was capable of. I didn’t think he was holding me back, I think the choice of amps that he picked for me could have been better though! Rowan, Doug, and Tracy G were all great, all had it together, and brought a whole new world to Dio. When I was getting back in the band, Ronnie thought having two guitarists would be cool. He by no means meant that Tracy would be second to me and him playing rhythm only. No way! Ronnie would never put it that way, because it wasn’t that way. Even if the record company wanted that way, he would have told them one thing and done another. Tracy is a great writer, he comes up with stuff that’s out of this world. Some fans liked what he brought to the band, but others were tired of the sound effects and missed the old sound. They wanted it both ways. They wanted Ronnie to do something different, but they wanted him to do something that was the same. Ronnie was stuck in a hard place. So he brought me back, but he didn’t want to lose what he had with Tracy. This was a decision that was up to Tracy. He was not offered a 'second to Craig' role no matter what he says. He heard it wrong, misunderstood it, or was told something different by somebody else."