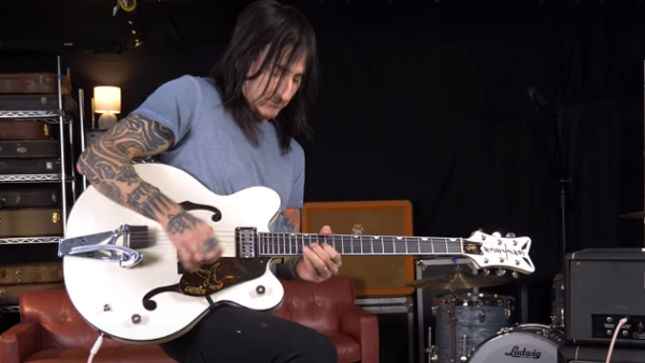 The clip below features Guns N' Roses guitarist Richard Fortus running through six of his favorite amps from his personal stash, each available for sale as a part of the Richard Fortus Collection, stage-and studio-played gear only at the Chicago Music Exchange.

Fortus recently spoke with Guitar World about developing two new signature models with Gretsch, his favorite amps and pedals, and the genius of his legendary co-guitarist, Slash. Following is an excerpt from the interview.

Guitar World: What’s been your favorite song on the setlist during this reunion run?

Fortus: "When we were last in Europe we were playing (Pink Floyd’s) 'Wish You Were Here', which ended up being one of my favorite moments in the set. That just came about because Axl broke his foot on the first show of the tour. So he was in the chair and we were at soundcheck preparing for the second show. He wanted us to fill some time for him to get to the piano for 'November Rain' and come up with some musical thing for that point in the set.

Slash looked at me and was like, 'What do you want to do?' And I was like, 'I don’t know!' so then he asked if I knew 'Wish You Were Here' and I said yes. He just started playing it and we all came in together. We just did it once at soundcheck and the crew – who are the most jaded people ever (laughs) – just stopped and applauded when we finished. Because it was like this magical thing that happened… that’s what music is, a magical conversation. We liked how it sounded so we kept it for the rest of the tour."

Guitar World: Some of those more improvised moments end up being a highlight of the set for the crowd, too!

Fortus: "It was so much fun because Slash was playing completely different every time. He doesn’t repeat himself. That’s why he is a legend. As a guitar player, you tend to fall into your ruts – you know what works for your solos and how to build them when you play them every night. But Slash doesn’t do that, in the same way Hendrix never did. You’d listen to four different bootlegs from the same tour and they’d all be completely different. But Slash always plays Slash… he’s doing his thing.

That’s what a legend is and I love that. Slash walks out to play a solo in front of a stadium full of people and he has no idea what he’s going to do. He’s just so in the moment, he starts playing and what comes out comes out. It’s absolutely amazing to bear witness to. I get to watch that every night.

And some nights I’m like, 'God damn, how does he do this?' It’s so inspiring. When we have that moment of back and forth during that song it’s great. We push each other to do something different – or at least he pushes me – to not fall into a rut and keep evolving and stretching out. That was always a great moment in the set."

Richard Fortus has been a member of the hard rock band Guns N' Roses, with whom he has recorded one studio album, since 2002. Fortus has also collaborated extensively with The Psychedelic Furs frontman Richard Butler and fellow Guns N' Roses bandmate Frank Ferrer. Aside from lead singer Axl Rose and keyboardist Dizzy Reed, Fortus is the longest-tenured member of Guns N' Roses, having been with the band continuously since 2002. Alongside his work in Guns N' Roses, Fortus is a former member of Love Spit Love, Thin Lizzy, and The Dead Daisies.