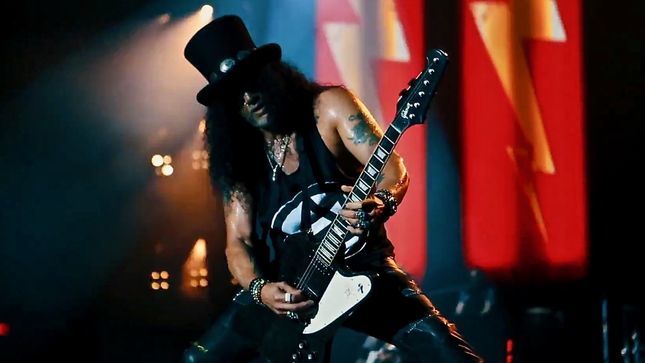 TMZ is reporting that Guns N' Roses guitarist Slash has ended his 17 year marriage to his estranged wife, Perla Ferrar. Slash will reportedly pay Ferrar $6.6 million as well as $100,000 per month in spousal support, and $39,000 per month in child support. Ferrar will get primary physical custody of sons London and Cash, each of the children receiving .09% of Slash's income for the next 20 years.

Slash will keep all his guitars and any musical compositions he owns, with future proceeds belonging to the rocker. He will also get a 2011 Ford F-150 and the Beverly Hills house. Perla will get the house in Los Angeles, a 2014 Range Rover, a 2015 Mercedes AMG and a 2015 Mercedes GL 450.

Divorce proceedings have been in the works since 2014. The couple went before a judge on September 4th, when the details provided by TMZ were hammered out and made official.

Check out the TMZ report here.

Slash Featuring Myles Kennedy And The Conspirators will release their new album Living The Dream on September 21st via Slash's own label Snakepit Records, in partnership with Roadrunner Records. In the short video below, Slash chats about the album with Eddie Trunk on SiriusXM:

In another clip, Slash talks about touring with The Conspirators again later this year:

The band has also unveiled the album cover art and tracklisting for Living The Dream. The artwork was created by renowned visual artist Ron English.