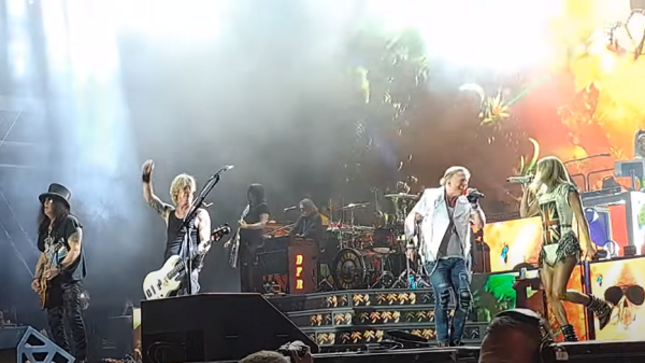 On July 1st, Guns N' Roses performed at Tottenham Hotspur Stadium in London, England. During their set thy were joined by country-pop star Carrie Underwood for "Sweet Child O' Mine", and for "Paradise City" during the encore. Check out fan-filmed video below.

On April 30th, Axl Rose joined Carrie Underwood on stage at the 2022 Stagecoach Festival in Indio, California to perform the same two G'N'R classics. Video can be seen below.

Both Rose and Underwood shared photos from the night via social media following the show. Check out the shots and their comments below.

Best. Night. Of. My. Life!!! I am still freaking out!!! Thank you, @axlrose, for making this lifelong dream come true!!! You rocked that @Stagecoach stage harder than anyone has ever rocked it before! ❤️🔥❤️🔥❤️🔥 #SweetChildOMine #ParadiseCity #AxlRose… https://t.co/Z91QtDQ6OI pic.twitter.com/vQnAJJMFPn


Back in 2015 interview, Underwood told E!, "I really want to sing with Axl Rose at some point in my life. I've covered enough Guns N' Roses stuff and it was people like him who taught me how to sing. They were so different. I look at people like him and Freddie Mercury, those people who were doing all these crazy runs. It was so different."