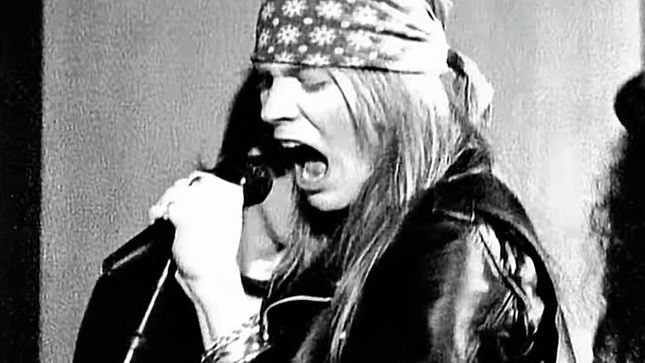 Guns N' Roses' hit song "Sweet Child O' Mine", which first appeared on the band's debut album Appetite For Destruction, issued in 1987 via Geffen Records, is featured in the trailer for the new Marvel Studios movie, Thor: Love And Thunder (see below).

The song debuts at #1 on the April 30-dated ranking and re-enters the Hot Rock & Alternative Songs chart at #9. (Older songs are eligible to appear on Billboard‘s multi-metric charts if in the top half and with a meaningful reason for their revivals.)

In the April 15-21 tracking week, “Sweet Child O’ Mine” earned 4.7 million official US streams, an 8% boost, and sold 1,600 downloads, up 181%, according to Luminate, formerly MRC Data. A staple of classic hits and rock radio, it also drew 1.2 million in audience on stations that report to Billboard‘s Radio Songs chart.

The track’s Hot Hard Rock Songs coronation gives Guns N’ Roses its first ruler on the ranking, which began in 2020. The band boasts two previous top fives, paced by the #2-peaking “Hard Skool” in October 2021, after “Absurd” hit #5 in August.

“Sweet Child O’ Mine” concurrently lifts 2-1 on Hard Rock Streaming Songs for its 24th week atop the survey since its 2020 premiere and jumps 16-3 on Hard Rock Digital Song Sales.

Released in 1987 on Appetite for Destruction, “Sweet Child O’ Mine” topped the Billboard Hot 100 for two weeks in September 1988, becoming the band’s first of six top 10s.

Thor: Love And Thunder  finds Thor (Chris Hemsworth) on a journey unlike anything he’s ever faced – a quest for inner peace. But his retirement is interrupted by a galactic killer known as Gorr the God Butcher (Christian Bale), who seeks the extinction of the gods. To combat the threat, Thor enlists the help of King Valkyrie (Tessa Thompson), Korg (Taika Waititi) and ex-girlfriend Jane Foster (Natalie Portman), who – to Thor’s surprise – inexplicably wields his magical hammer, Mjolnir, as the Mighty Thor. Together, they embark upon a harrowing cosmic adventure to uncover the mystery of the God Butcher’s vengeance and stop him before it’s too late.