GUS G. Talks New Solo Album - "During The First Lockdown I Felt Very Inspired; When I Was Finishing The Album I Had No Inspiration At All" 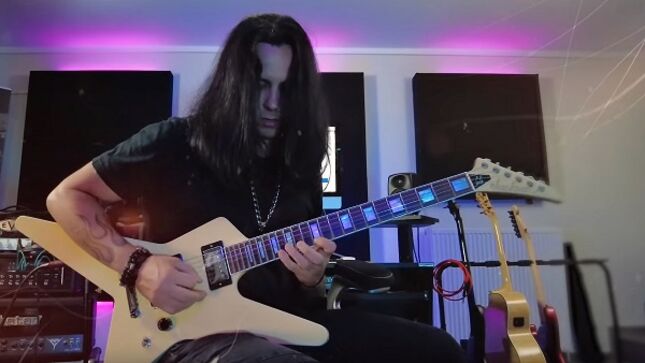 Firewind guitarist / founder Gus G. is featured in a new interview discussing his new  Quantum Leap. It aired on Blackdiamond's Metal Mayhem. Check it out below.

On how the album came together

Gus: "I started working on it Spring 2020 when the first lockdown happened. I was actually just finishing up doing press for the last Firewind album that came out, the self-titled record that came out last year and then all of a sudden everything was cancelled.

So you know, I realised I was gonna be at home for a while and I just immediately started putting down ideas on my computer just for the fun of it, just to see what’s gonna happen and then I realised, well we’re gonna be here for a while. So I think around summer I was kinda going through the demos I had and I’m like ‘well, maybe I should just make an album. I have enough material to kind of dig in now and do something.’ It really gave me something to do, it was not a planned album, it was like a thing just to help me occupy my time I guess.

During the first lockdown I somehow felt very inspired and wrote a lot of stuff, which was kinda funny because on the second lockdown when I was finishing up the album, I had no inspiration at all (laughs). I’m glad I was able to write all this material.”

On being a solo artist

Gus: "I have my own style and my own sound, but obviously I’ve been experimenting quite a lot on my solo efforts. Whether it is me collaborating with different singers or musicians and making more like rock stuff or hard rock stuff, or whether I’m making classic metal or modern metal, or now, going instrumental. I look at my solo career as a vessel to put out all the other stuff I wouldn’t be able to do in Firewind. I think this instrumental record is a nice addition to the catalogue. I mean, now whenever I go back to playing live I can sort of mix it up onstage. I can kind of envision that, of doing maybe a half and half show or something, or blend it all in."

Gus G. recently released a video for his new single, "Into The Unknown", featured on Quantum Leap, out now via AFM Records (vinyl available November 26). Watch the video below, and order the album here.

It is no longer a secret that Gus G. plays in the top league in the world of guitar virtuosos. Not only has he played the world's biggest stages in his time with Ozzy Osbourne, but he was also able to gain a firm place and a loyal fan base in recent years with his own band Firewind and his solo project.

On his new album, Quantum Leap, Gus G. continues his straight and inspirational path, this time focusing only on his excellent craft. For this reason, the new album is an instrumental album, but so complete in itself that it can make many a person green with envy. Gus G. has again relied on his longtime colleague Dennis Ward for production, but has done the mixing and mastering entirely on his own terms. Hard metal tracks line up with melodic riffs and make this album seem like a complete work.

Quantum Leap is a tribute to himself, to a great guitarist and instrumental artist.