HOLY GRAIL, EXMORTUS And SPELLCASTER To Embark On Fellowship Of The Strings Tour 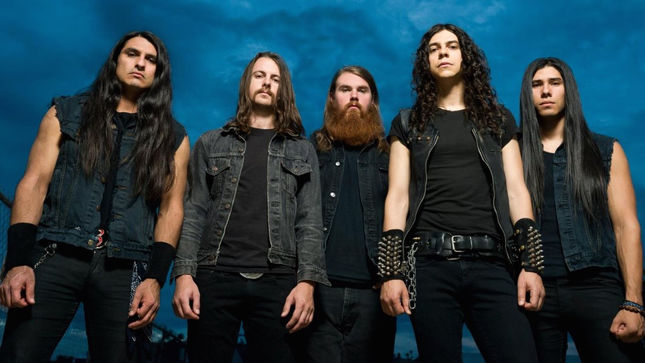 Prosthetic Records’ traditional heavy metallists Holy Grail (pictured above) and neoclassical shredders Exmortus will join forces this summer on The Fellowship Of The Strings tour, with support provided by label newcomers Spellcaster. The triple-shred package will make its way across the US from July 12th to August 6th. A complete listing of tour dates will be announced in the coming weeks.

"It's not every day you get to tour with your buddies' bands," jubilantly exclaims Holy Grail vocalist James Paul Luna. "This is one of those rare chances, and we're super-stoked the dream has become reality. So look out America, 'cuz some heads are gonna roll!"

Holy Grail will continue to support their third full-length, Times Of Pride And Peril, which was produced by Grammy-winner John Spiker (Tenacious D, Filter). Recently, the band showcased its efforts on the road with Marty Friedman, King Diamond, Black Tusk and more. The quintet are currently making their way east for a mix of headlining dates and shows alongside DevilDriver.

Exmortus frontman Conan was just as excited about the announcement. "We've never had the pleasure to do a full-scale tour with our fellow shred comrades, but finally the time has come! Join us in our quest to spread the shred and be a part of The Fellowship Of The Strings!"

Known for their rigorous touring schedule, Exmortus just finished a successful six-week jaunt with Amon Amarth and also recently toured alongside with Marty Friedman, Warbringer, Enforcer and Cauldron. Their sophomore Prosthetic album Ride Forth includes the songs "For The Horde" and "Death To Tyrants," both of which have received extensive airplay on SiriusXM's Liquid Metal.

Up-and-coming classical heavy metal troupe Spellcaster also voiced enthusiasm for the tour package, with bassist Gabe Franco commenting, "We have massive respect for both of these bands and are honored to be a part of such a strong touring package. See you on the road this summer!"

Having recently announced their debut release with Prosthetic, Night Hides The World (due out July 8th), the Portland-based quintet are currently on the road with Canadian metal act Striker.