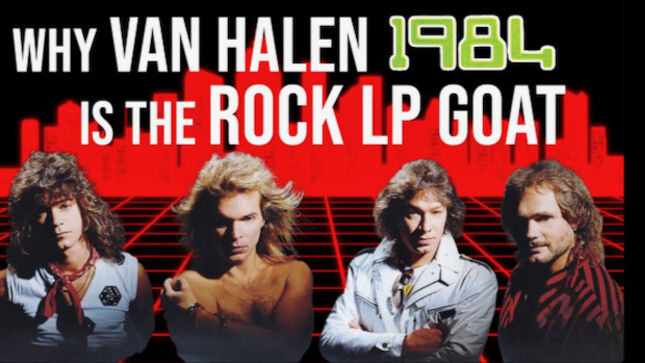 "Today we are going to break down one of my favorite albums of all time song by song. The grand spectacle of rock and roll thy name be 1984….the 6th studio LP by Van Halen has sold more than 25 million copies around the world.

The buildout for one of the biggest selling albums in history was surrounded by bitter tension, with the fractured relationship between the iconic leaders of the band (Eddie Van Halen & David Lee Roth) hanging in the balance. We’ve talked about some of the songs before but today we get down to brass tax. So sales for Van Halen records steadily declined from the mammoth success of Van Halen’s self-titled debut album - to their 4th album, Fair Warning.

There was a bit of an uptick on their 5th album Diver Down, but it was far from the huge numbers Van Halen and Van Halen 2 generated. Such was the state of affairs for one of the greatest rock bands of all time in 1983. Following the release of Diver Down, Eddie Van Halen was dissatisfied by the concessions he had made to Van Halen frontman David Lee Roth and to Warner Brothers producer Ted Templeman.

"There were no presets," said Templeman. "He would just twist off until it sounded right.” At the new 5150 studio, he composed Van Halen's follow-up to Diver Down seeking relief from "interference" from Roth or Templeman.

Eddie called this period “phase one of Donn & Ed."

To make the workplace as congenial as possible, there was a compromise between the two creative factions in the band: a mixture of keyboard-heavy songs, and the intense hard rock for which the band was known for.

If you asked Templeman, or Roth what they predicted for Van Halen’s 6th album, you would hear fear & doubt, with the belief that fans would revolt against their guitar hero’s fascination with synthesizers. Eddie, on the other hand, was convinced that Van Halen was in dire need of artistic expansion, and the evolution would vault them from America’s favorite party band to the most prolific group on the planet. Unlike the previous 5 studio albums that were recorded in just a few weeks, 1984 took nearly a year to finish. To put that time frame in perspective, Van Halen’s first album, was completed in ONLY 5 DAYS.

1984, was released on January 9th of that year- kicking off one of the most glorious times in popular music history. I’ve said it a few times on here. I believe that 1984 was the greatest year in music history.  Some will argue 1966, some say 1971, some throw out 1987 but I don’t think any of them top 1984.  It was a year where you had the biggest blockbuster albums ever with hit single after hit single to the point where these albums play like greatest hits albums and the best part of it is that they were GREAT with a capital G. Albums that are still mind blowing today. Albums and songs that never get tiresome.