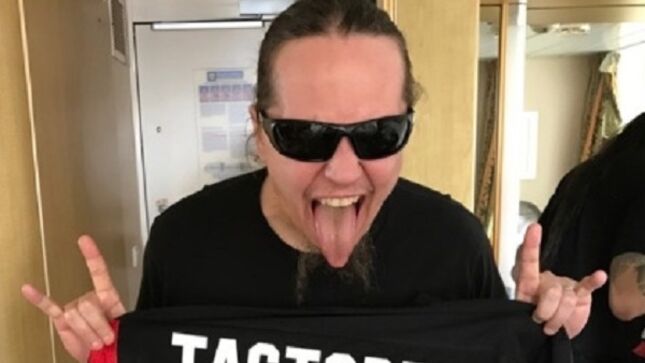 In the clip below, Hypocrisy / Pain frontman Peter Tägtgren chats with Finland's  Chaoszine about his journey as a metal frontman.

On becoming a vocalist

Peter: "At the beginning of the '90s I wanted to try and combine Glen Benton with David Vincent and L-G Petrov. Those were the three highlight bands, so to say: Deicide, Morbid Angel and Entombed. That was the perfect mix for me."

Hypocrisy's latest album, Worship, is 11 tracks of precise, ferocious musicianship. Commonly inspired by the fusion of the modern and the ancient, Hypocrisy has once more found a way to combine innovative ideas with classic sound in order to deliver something metalheads can enjoyably consume with awe and brutal vigor. As usual, all recording and mixing took place at Tägtgren’s Abyss Studio AB in Sweden while mastering was completed by Svante Forsbäck at Chartmakers Audio Mastering. Designed by artist Blake Armstrong (Kataklysm, In Flames, Carnifex), Worship’s artwork speaks to the history of the relationship between humanity and extraterrestrials.

Worship was released on November 26, 2021 via Nuclear Blast Records.