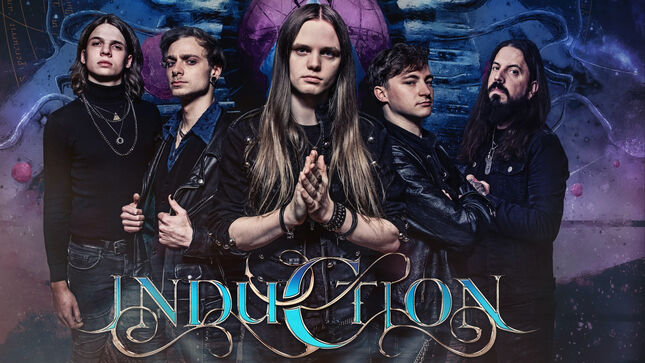 After announcing their signing to Atomic Fire Records, progressive power metal quintet Induction unveiled a downright anthem and the first milestone in the row of several singles waiting be unleashed this year with "Sacrifice". Watch a new bass playthrough video for the song:

Mixed and mastered by renowned Jacob Hansen, "Sacrifice" draws you right into a refreshing world of soaring vocals, melodic guitars, heavy riffs, and an incredibly catchy chorus that won't leave your brain anytime soon. With this mix of virtuosic progressive twists and symphonic elements, Induction is setting the new status quo of the genre and following the reformation of the band, this song is the first to put listeners to the test, and sets exceedingly high expectations for what’s yet to come.

Originally founded in 2014, the band left their first mark with first single, “The Outwitted Consecration” (2016) before officially entering the metal world with their self-titled debut album in 2019. Its enormously positive reception paved the way to touring across Europe alongside Brazilian power metallers Armored Dawn in November of the same year. It was a notable career start for the quintet that was unfortunately halted by the still-ongoing pandemic ultimately leading to a break (at least on the live front) that was to work on their sophomore album and renew their power. Atomic Fire Records is pleased to welcome Induction and their new lineup - vocalist Craig Cairns (ex-Midnight Prophecy), guitarists Tim Kanoa Hansen and Marcos Rodriguez (ex-Rage), bassist Dominik Gusch, and drummer Kian Kiesling - to its roster.