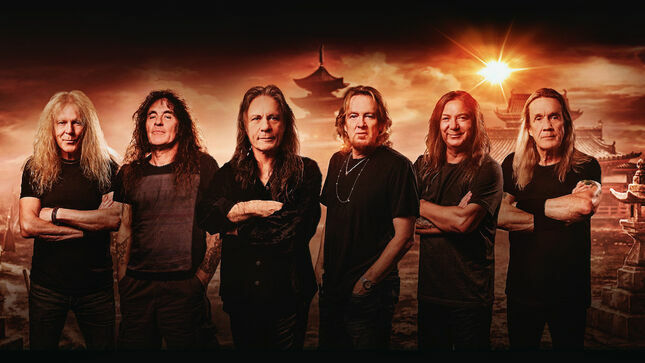 Iron Maiden drummer Nicko McBrain spoke with Meatball at T95 The Rock Station about the band's upcoming 17th studio album, Senjutsu, promising "lots of surprises" sonically on the record. Check out the interview below.

McBrain: "The only way I can sum this record up is there's a little bit of everything in it. If you analyze certain sounds, certain ways the guitar sounds, certain vocal treatments, reverbs, little plate echoes and delays and stuff like that, different compressions on the drum set… Steve's (Harris) bass tones change slightly and there's a bit of everything. Say, from the early albums of Maiden through to the middle -  Somewhere Back In Time, Seventh Son... - sound-wise, and some of the flavors on the tracks within the writing of the tracks.

Steve wrote three of these epic songs - I think there's over 30 minutes of songwriting on just three songs - and it was all penned by Harry. No one else came in with anything else. Steve went, 'I've got an idea for this melody.' Obviously, as it's created, then you have your artistic input. It's not like I had to play exactly the drum fill that Steve wants, but there's something for everybody and there's a little bit of new stuff. There's a couple of other little gems and nuggets that will come to people, and they're gonna go, 'Oh, blimey, that sounds like so-and-so and so-and-so...'"

Bruce Dickinson continues: “We’re all really excited about this album. We recorded it back in early 2019 during a break in the Legacy tour so we could maximize our touring yet still have a long set up period before release to prepare great album art and something special as a video. Of course the pandemic delayed things more - so much for the best laid plans – or should that be ‘strategies’!?  The songs are very varied, and some of them are quite long. There’s also one or two songs which sound pretty different to our usual style, and I think Maiden fans will be surprised -  in a good way, I hope!"

Senjutsu will be released on the following formats and is available to pre-order/pre-save at IronMaiden.com.

"The Writing On The Wall" (SFX Version)

Senjutsu - In The Studio videos: