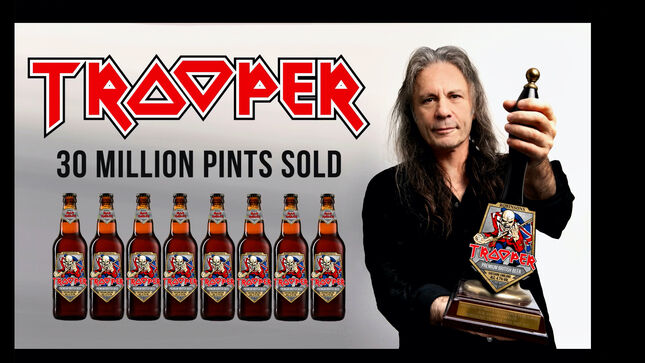 On a landmark day for British pubs as they re-open inside Iron Maiden and Robinsons Brewery are celebrating 30 million Trooper pints sold around the globe during the week they marked the 8th Birthday of their hugely successful collaboration.

Since its launch in 2013, the 4.7% Premium British Beer that is Trooper original has become a leading player amongst British ales, exported to over 60 countries around the world and enjoyed by countless beer lovers in the greatest of British pubs and from the comfort of their homes.

Despite pubs being closed for a large part of 2020, Trooper has continued to enjoy strong sales through online distribution partners and export listings throughout and even spawned two new beers during the year – Trooper Fear of the Dark, a 4.5% ABV English dark roasted chocolate stout that is full bodied and rich in flavour, and Trooper IPA, a 4.3% ABV golden India Pale Ale packed full of hoppy flavours. Both these new Trooper beers have again been brewed in collaboration with Iron Maiden frontman and beer aficionado Bruce Dickinson at the helm and both have enjoyed a terrific response in retail and export markets.

Bruce Dickinson said, “I couldn’t be prouder of what we’ve achieved with Robinsons in reaching the 30 million pints milestone. We’ve developed a family of outstanding Trooper beers that our fans and beer drinkers all over the world enjoy, which tells you a lot about the quality, originality, provenance and distinctive character exhibited by every Trooper beer. The fact that other leading international brewers have also wanted to partner with us in creating local Trooper variants is further testament to what we and Robinsons have created. Long may it continue, and here’s to the next 30 million pints!”. 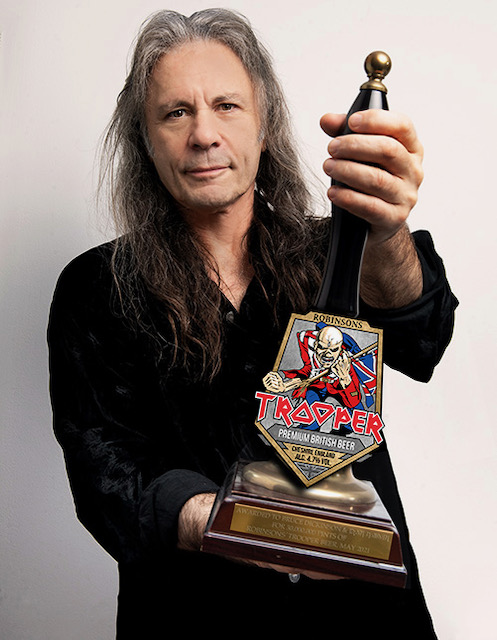 Along with the core beers – Trooper original and Trooper IPA – the Trooper family now includes a range of  popular seasonal and limited edition beers  that have joined the charge over the last eight years including popular brews such as Sun and Steel (sake infused pilsner),  Red ‘N’ Black (porter), 666 (extra strong bitter), and Belgian styled beer, Hallowed, along with the annual “Day of the Dead” Trooper special edition. Internationally, the range was joined last week by ‘Hellcat’ – a 6% India Pale Lager brewing collaboration with BrewDog to be released later this year and available in the US only.

Earlier in 2021, Robinsons and Iron Maiden celebrated their award-winning beers with Trooper: The Collection 2 – a love letter to their finest beers allowing fans to get their hands on a collection of Trooper limited editions.

Dean Etchells, Robinson’s Trooper Brand Manager said: “It is a remarkable achievement for Trooper to be celebrating its 8th Birthday along with an epic milestone of 30 million pints sold across the world. This success and longevity stands as testament to the quality of Trooper beer and it’s continued worldwide appeal to Iron Maiden fans and beer drinkers.”

Oliver Robinson, Managing Director of Robinsons Brewery said: “From Bruce visiting the brewery to do a blind taste test with us to this incredible milestone and several award-winning beers later, it’s been quite the journey! We are immensely proud of what Robinsons and Iron Maiden have achieved with Trooper over the last 8 years, and the exciting part is that it feels like we’re just getting started!”.

To celebrate 30 million pints, Trooper and Robinsons Brewery are making it easier and cheaper than ever for Trooper fans to get their hands on the beer. Starting from Monday 17th, Robinsons will be offering free shipping on all orders over £60 across the UK* from here.

In the video below, Bruce Dickinson and Pete Brown celebrate 30 million pints and look back over the last 8 years of Trooper: