Is Singing AC/DC As Hard As Singing Opera?; New Beyond The Thunder Podcast Posted 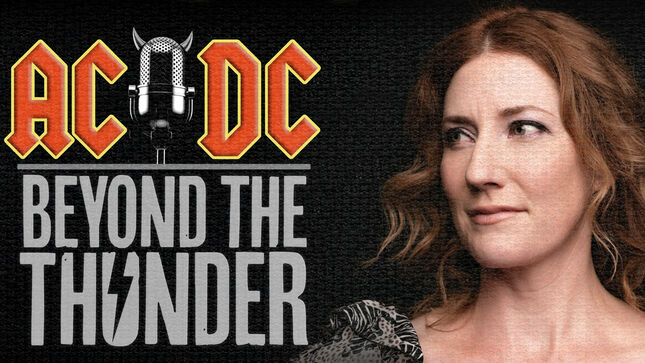 During this uninhibited episode of AC/DC Beyond The Thunder, critically acclaimed Canadian singer-songwriter, Kathleen Edwards, who Rolling Stone declared one of year's most promising new acts when she first entered the music scene, sits down to discuss how AC/DC gave her, to quote Bon Scott, Big Balls.

“Neil Young was the first big influence in my house,” recalls the fiery Ottawa native, who also practiced her craft citing such artists as Tom Petty and Bob Seger. But one day her inspiration went from Neil Young to Angus Young, reimagining AC/DC’s highest charting single of all time in the US, "Moneytalks", which she remembers giving her a bit of street cred while on the road.

“I pick up my Les Paul Junior and I turn on my AC10 and I play a lick from AC/DC,” Edwards grins, “And I can just see the bar staff or anyone who’s in the room while I’m sound checking go, ‘Holy shit, she's OK!’. I actually really get off on that feeling.”

When asked why she chose "Moneytalks" out of AC/DC’s massive catalog, she hits back with, “It wasn’t, 'Hells Bells'. It wasn’t, 'You Shook Me All Night Long'. I like covering songs that are a little less conventional.” A song that apparently lead singer Brian Johnson was never too thrilled to sing with AC/DC, as he told Edwards backstage after opening for the band during the Molson Canadian Rocks for Toronto benefit concert back in 2003.

“I met Brian Johnson and they’d just got off stage and I said, ‘You didn’t play 'Moneytalks’. Johnson, who referenced Edwards as, ‘A fine lass’ then quipped, “Awwww—I fucking hate signing that song! I don’t sing it because it's too high!”

Even though she’d appeared on Letterman, Austin City Limits, NPRs Tiny Desk Concert, and Bonnaroo, Edwards was truly shocked to be added to the Canadian Rocks benefit concert, which would become the largest outdoor ticketed event in Canadian history, a bill that included Jeff Healey, the Flaming Lips, Justin Timberlake, The Guess Who, Rush, AC/DC and headlining—The Rolling Stones.

It had been nearly 25 years since AC/DC opened for another band, and Edwards remembers AC/DC’s competitive nature coming out that day, “I think they marked the gig as, 'We’re going to play a show that is gonna make everyone think that when we’re done—the show is over'. And they did.”

Edwards goes on to discuss AC/DC's influence on everyone from Celine Dion to Jack Black to even fielding malicious remarks served up by Sinéad O’Connor, who once attacked Brian Johnson’s vocal ability.

She adds: “AC/DC is like cocaine in a musical format,” Edwards smirks, sitting beachside on the shores of Cape Cod, Massachusetts. “It makes you feel good. It’s like instant serotonin…not that I’d know!” She laughs.

And as a singer-songwriter, Edwards also offers up her opinion on AC/DC’s potentially misogynistic lyrical content. “The worst thing in the world for me as a songwriter is to put on a song that someone’s excited about and you don’t know what the song’s about. With AC/DC, you don’t have that problem. 'Whole Lotta Rosie' is about fucking a big, big, big girl. I love that!" 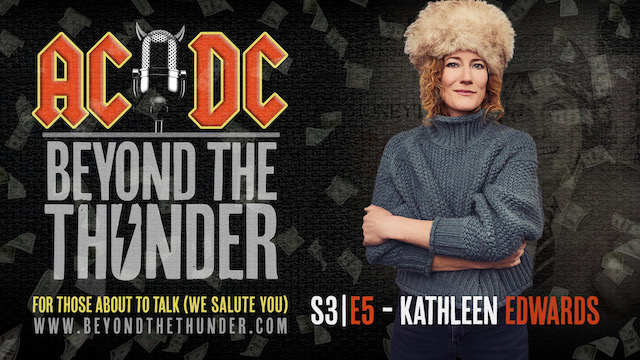 Fans of the podcast can listen to this new episode and more at BeyondtheThunder.com.

AC/DC Beyond the Thunder was created by duo Gregg Ferguson & Kurt Squiers, who both quit their jobs and set out to capture a feature length documentary as the ultimate homage, but failed to secure the band’s approval. Ferguson and Squiers decided to unearth these stories of well-known fans discussing their affinity for AC/DC and harness that energy into a podcast with the help of sound engineer, Eric Kielb. From archival interviews to all new guest episodes, AC/DC Beyond the Thunder is now in its third season with over 175,000 streams.