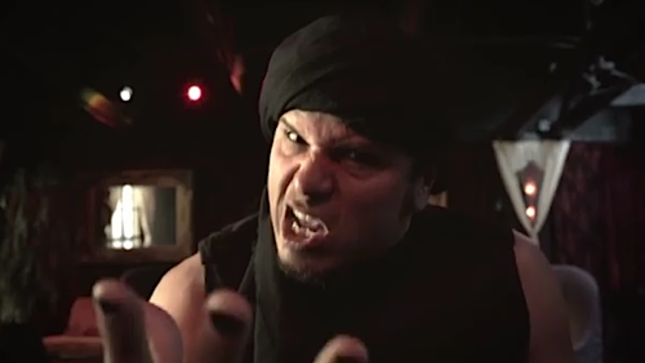 In a new interview with music writer and longtime BraveWords supporter Joel Gausten, veteran vocalist Jeff Scott Soto (Yngwie Malmsteen/Journey/Talisman/Trans-Siberian Orchestra) talks in depth about his new band Soto (who recently released their debut album, Inside The Vertigo), his longevity in the music industry and his hopes for the future of his career. Additionally, he opens up about his time as lead vocalist for Kryst The Conqueror, the obscure Christian-themed late '80s Metal band formed by Jerry Only (then calling himself “Mo The Great”) and Doyle of the Misfits. Soto's involvement in the short-lived group resulted in the 1990 EP Deliver Us From Evil and a still-unreleased full-length album. An excerpt from the chat appears below:

Gausten: When considering your past work, there's obviously a pretty long list to draw from and mention. There is one artist in particular that's always been of interest to me: You worked with Jerry and Doyle in Kryst The Conqueror. There hasn't been much said about that over the years, so I'm curious if you could shed a little bit of light on how you became involved in that project, that album and how that all came together.

Soto: "When those guys parted ways with Glenn (Danzig), they wanted to do something a lot different. They wanted to draw from a different perspective from what people already knew them from. I think it was Mo who came up with the idea that they wanted Kryst The Conqueror to not only come out on a more positive level, but they wanted a kind of science fiction/comic book edge to it. So they wanted to turn that band basically into a comic book. They had the whole idea that it would be a comic book Heavy Metal band. Musically, I was never a big Misfits fan. I love the attitude, and I could watch and listen to the band, but they weren't on my playlist; I wasn't listening to them in my car. The same had to be said about Kryst The Conqueror. I wasn't really a big fan of what they were doing musically. I wasn't about to quit my day job, so to speak. I wasn't about to walk away from what I was actually chasing to do something like this, but they were very coercive to the point where they were giving me a good chunk of money to come down and do the studio stuff with them and hang out with them. I had a really good time with those guys; I love them to death. They're the nicest guys; to this day, we still have a very strong friendship. But musically, it just wasn't for me. We did our thing, and that was pretty much it. They did everything they could to coerce me to stay or to move on with them, but it just wasn't for me."

Gausten: How long did you work with them in the studio?

Soto: "I was out there for maybe two weeks, maximum."

Gausten: Were the lyrics already written?

Soto: "Everything was written; even most of it was demoed. I think it was Mo who did most of scratch vocals, just to give me an idea melodically of how the lyrics fit into the music. I just had to make it my own and put my own stamp on it. But I just wasn't ready to put on an armored suit and a codpiece as the future of my frontman career."

Gausten: The legend goes that the vocals were credited to 'Kryst The Conqueror' because you were under contract with Yngwie Malmsteen at the time.

Soto: "No, that's absolutely false. It was credited to 'Kryst The Conqueror' because that's how the character was supposed to be written. Everybody was supposed to have comic book names, so they gave the lead vocalist that character name. It had nothing to do with contracts; I was under no contracts or binds with anybody at that time. This is back in 1988; I was long gone from Yngwie's fold by then."

Gausten: Do you still listen to the Kryst The Conqueror recording?

Soto: "I haven't heard it in decades. If I listened back to it, it'll probably all come back to me, but I couldn't even sing you a melody from it because it's been so long."