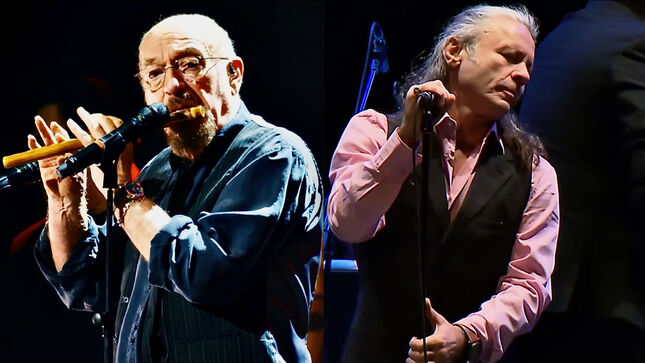 Canada's The Metal Voice recently spoke to Jethro Tull leader, Ian Anderson. In the interview, Anderson spoke about the new album The Zealot Gene, gave an update on the continuing reissues of the bands catalog, and spoke about meeting Iron Maiden's Steve Harris and performing with Bruce Dickinson.

The Metal Voice asked Ian Anderson about working and meeting Iron Maiden's Steve Harris and performing with Bruce Dickinson: "I probably met Steve Harris briefly on one occasion a little bit more on another occasion. I know he is a rather shy person, he said he never wanted to push himself forward in terms of trying to meet me or talk to me. I think I got in touch with him and asked him if he would do a little throw away intro to a particular track on a live concert tour we did, in terms of being a video. A little video contribution that he offered to introduce a song."

Anderson adds, "I think his interest in Jethro Tull is probably based on having gone in a direction kind of beyond the performances that you would associate yourself with Iron Maiden. The first thing Iron Maiden seemed to be linked to Jethro Tull was a song called Cross -Eyed Mary which was on the Aqualung album and they did it on an early record release. I think they did it in the same key as I did but puts it in the impossible key for Bruce Dickinson. Bruce is a tenor and I am a baritone a low baritone. So for him to sing down here, he had to go up an octave but then he was going up really an octave which out it in a very uncomfortable high register that even as young Bruce Dickinson, he was pushing  his luck singing it an octave higher, than my original vocal. "

He continued," I don't really know these people very well at one occasion Bruce was a guest of mine at Canterbury Cathedral's performance I did in 2011 and he is a great person to work with, very professional, very straightforward, Easy going guy we learnt his couple of songs and he sang on one of ours. I got an e-mail this morning from Bruce Dickinson, that he sent a couple of days ago about asking me to do some live performance project together at the end of next year. "

Jethro Tull recently announced details for the group’s first studio album of new material in over 18 years. Originally making headlines in March of this year, the band’s newest offering, titled The Zealot Gene, will see a January 28 release via InsideOutMusic.

Tull bandleader Ian Anderson holds no reservations about the role for which the mythos and themes of Biblical storytelling played in the lyrical content of the new album, saying: "While I have a spot of genuine fondness for the pomp and fairytale story-telling of the Holy Book, I still feel the need to question and draw sometimes unholy parallels from the text. The good, the bad, and the downright ugly rear their heads throughout, but are punctuated with elements of love, respect, and tenderness.”