JOE SATRIANI's Longtime Manager MICK BRIGDEN Dead At 73 - "Honest, Tough, Nurturing, Hardworking, Respectful, Tenacious, Insightful... He Was All Of Those Things And More" 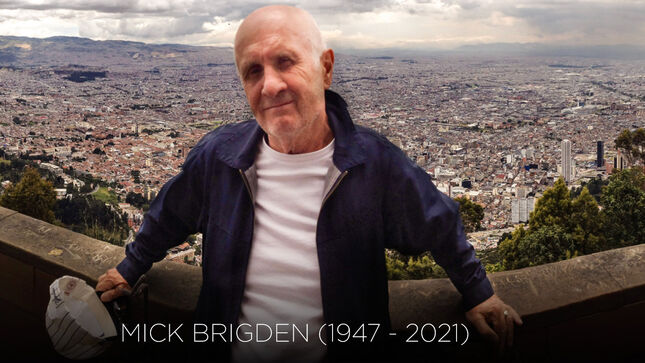 Joe Satriani's official website has confirmed the passing of artist manager, and former Bill Graham protégé, Mick Brigden, who died on September 5 following an accident while on his property at his home in Santa Rosa, CA. He was 73.

Mick spent decades managing and road managing the likes of Humble Pie, Mountain and Peter Frampton in addition to Van Morrison, Taj Mahal and Carlos Santana among others. He directed tours for The Rolling Stones and Bob Dylan and is perhaps best known for the last three decades managing the career of multi-platinum, Grammy-nominated solo guitarist Joe Satriani.

Born November 4, 1947 in Southend On Sea, England, Brigden left for Canada at the age of 19 settling in Toronto as a graphic artist before finding his way to New York after meeting Mountain's Felix Pappalardi in the late 60's and becoming their road manager. As luck would have it, in July 1969 he met both Graham and his future wife, Julia at a concert they all attended at the Fillmore West and Brigden 'fell in love with San Francisco.'

In 1976, after working for Graham for seven years, Mick took the reins at the management division of Bill Graham Presents, co-leading alongside Arnie Pustilink, who recently succumbed to cancer on August 20. Recently Brigden told Billboard about his 25-year working relationship with Pustilnik "The two of us formed, I think, a left brain-right brain relationship that worked very well for our acts," Pustilnik was the radio promotion side with Brigden more adept at the creative and touring sides.

While working at BGP, Brigden and Pustilnik launched the Columbia distributed label, Wolfgang Records in the late 1970's. The labels first signing was the up-and-coming artist, Eddie Money and released his double-platinum debut in 1977 followed by four more albums. In the 80's the label waned but in 1995 it revived when they released Money's Love and Money among others.

Following Graham's death in 1991, Brigden and Pustilnik joined 13 other employees of Bill Graham purchasing 90% of the company with the remaining 10% held by Graham's two sons. In the early 2000's when Pustiknik's health began to deteriorate, he and Brigden sold the management business and Brigden opened MJJ with Satriani as his sole client.

After many years living in Marin Country, Mick settled down, with Julia, in the wine laced hills of Santa Rosa in 2001 It was here that he discovered a new-found talent for growing grapes in his vineyard, used to make an exclusive Owl Ridge cabernet. Brigden was also a true cycling enthusiast and old school - he rode a vintage Bianchi steel framed bike he bought and had shipped from italy during the massive 1982 European Rolling Stones tour he worked on.

At this time, Memorial plans are pending. As an animal lover, his family asks that any donations in Mick's name be sent to The Humane Society of Sonoma County.

Says Satriani: "The first time I met Mick Brigden I was just 15 years old. Along with a few friends, I was able to sneak backstage after a Humble Pie concert at Gaelic Park in the Bronx, NY. After getting pressed into service by the local road crew I ran right into Steve Marriott as he was getting into his limo. He shook my hand and gave me a friendly hug as I told him what a big fan I was. Just then, another exotic British fellow comes up and says, "All right, time to get Steve going, thank you very much" as he whisked Steve into the waiting car and sent me on my way in one very firm, professional yet gracious move. I never forgot his face or his voice.

"Ten years later I was in San Francisco Playing in the Squares, opening for a few BGP acts now and then. At one Eddie Money show I was warned not to have anything to do with Eddie's guy "Mick Brigden", as he was known to keep the opening bands on a very tight leash. I kept my distance but thought, "Don't I know that guy?"

"Then at the start of '88 I find myself not only with a solo career taking off and a hit album, but I'm unexpectedly playing in Mick Jagger's solo band. It was January in NYC where Bill Graham was producing Jagger's solo tour, and working right beside him at the rehearsals was Mick Brigden! This was the beginning of my association with Bill Graham Management, and finally getting to know the real Mick Brigden.

"Since then, it's been a crazy and wonderful 33 years of rock 'n' roll. I've never worked so hard, played so hard, laughed and cried so hard, made so much music and had so many worldwide adventures, and all with Mick by my side. He was the ultimate music business mentor. Honest, tough, nurturing, hardworking, respectful, tenacious, insightful, he was all of those things and more. I learned so much about how to be a good person from Mick. Throughout his illustrious career he worked with the biggest and the best, but always knew it was important to be kind, be respectful, be cool and do things the right way.

"He, along with the entire BGM team, guided my solo career from its start. Mick was always full of energy and endlessly creative. He could help you get an album project organized, pick the right mix, pick a single, help with album artwork, book a tour, manage a tour, review the contracts, crack the whip with a smile and get a table at the right restaurant when you needed one. And, then, over a few glasses of wine, share his feelings and insights, listen to yours, and remind you to smell the roses along the way.

"Mick was from South End on Sea, just outside London, UK. He was an original, with a wonderful sense of adventure in both his professional and private life. His enthusiasm for life was off the charts. "Renaissance Man" doesn't quite live up to describing him. He loved his family and his friends. Although I have hundreds of photographs of us together at our respective homes and on tour around the world, there is not one that can live up to representing our bond.

"It's not lost on me that as I type these words out that Mick was my proofreader. Whenever I had to write something for publication I would send it to Mick first, and he would find and fix my grammatical errors, and eliminate my excessive use of commas. He was a great editor of my ramblings, so, forgive me now as I'm not sure how to stop writing about my good friend. RIP Mick Brigden." Joe Satriani, San Francisco 2021