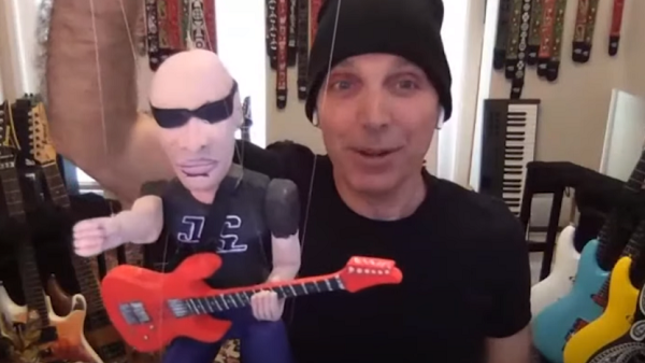 Guitar legend Joe Satriani recently guested on AXS TV's Rock & Tell and showed off some of his rock and roll memorabilia to host Katie Daryl. Check out the clip below.

Satriani recently celebrated 23 years of Crystal Planet and turned the concept into a five part comin comic book series. Issue #3 is now available for pre-order at this location. Street date is November 2021.

Experience a vivid space odyssey where Satchel Walker, a man out of time, finds himself caught between desperate factions as they battle for resources in the perilous orbit of a dying star. In a bold and brutal saga of sentient storms and Wingsuit armies, it’s music, and more importantly, the power and emotion that music can conjure, which could bring an end to the conflict, restore harmony to the timestream, and reveal Walker’s true place in the universe.

In issue #3, with his father’s old guitar and lifelong friend Sarah Fortune along for the ride, Satchel uncovers new revelations about his past that will likely cost him his future, just as his enemies close in… 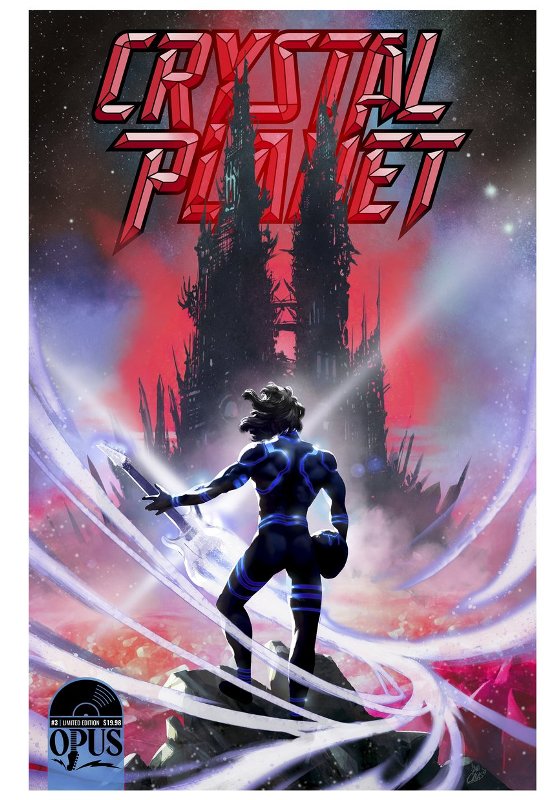 Pick up Crystal Planet issues #1 and #2 via the links below:

"Funny how things get their start," says Satriani. "July 1994 I'm on tour with Deep Purple and I'm warming up with my guitar backstage in a bull's isolation cell at the Plaza de Toros in Gjion, Spain. Then and there I start writing the opening riff to a song that will become 'Crystal Planet' and a few years later it's the title track for my '98 album release."

"Fast forward to 2013, friend and fellow guitarist Ned Evett makes an animated sci-fi video for my song 'Lies And Truths' using artwork from my Joe's Art 2013 book. We projected that video on a 30ft. screen every night of the Unstoppable Momentum Tour. It was a hit with the fans which got us thinking we could expand the clip into a Crystal Planet sci-fi epic. Ned and I formed Satchtoons, a company focused on creating animated content, and we got to work on scripts and demos for the Crystal Planet pilot."

Seven years later, thanks to Llexi Leon and Heavy Metal, here we are with our first comic book series! Llexi and I had worked together on his awesome Eternal Descent comics, and by coincidence we met again when Heavy Metal published a short excerpt of Crystal Planet adapted by Brendon Small for the magazine's 2019 music issue. Both Ned and I love working with Llexi and the Incendium creative team, they bring so much artistry and expertise to our time-traveling adventure. I am thrilled to finally offer our fans the first full issue of what will ultimately be a three novel trilogy."

"Crystal Planet is a thrilling rollercoaster through space and time, it's Mad Max Vs Tron - with guitars! This has been an incredibly rewarding project to bring to fruition, digging deep into the lore behind one of the greatest instrumental rock records. Working with Joe has always been a pleasure, having collaborated in comics with Eternal Descent years ago his love of the medium is well known," says Llexi Leon.

"There was a treasure trove of concepts and character exploration compiled over decades by Joe and his writing partner Ned that formed the basis of this project, with the ultimate goal to take fans on a journey to Crystal Planet for the first time. Tony, Richard, Carlos, and Jacob have done a tremendous job realizing an incredible world and telling it's story. It's fitting that our publishing venture with Heavy Metal would begin with a space faring time travel adventure!"

The world of Crystal Planet will extend beyond the printed page into toys and collectibles. A Joe Satriani Crystal Planet action figure is also available to pre-order now for $29.95, featuring Joe in a Tri-Diver suit from the comics with his signature Crystal Planet Ibanez guitar. Shipping May 2021.