JOEL HOEKSTRA On WHITESNAKE's Farewell Tour - "I Haven't Been Too Weepy About It Just Yet"; Video 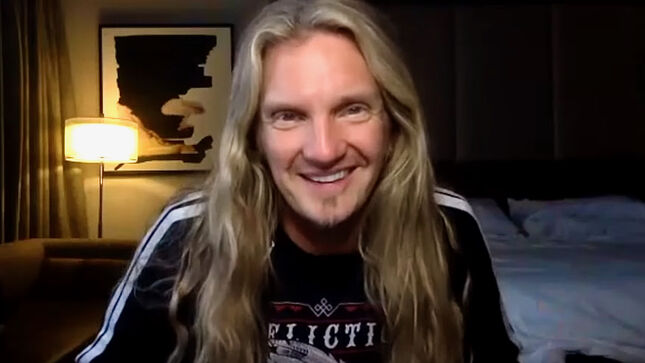 In a new interview with the Cassius Morris Show, guitarist Joel Hoekstra (Whitesnake, Trans Siberian Orchestra) discusses a number of topics, including Whitesnake's farewell tour, staying in shape, childhood influences, and much more. Watch below:

Whitesnake's farewell tour launched on May 10 at the 3Arena in Dublin, Ireland. The next show is tonight, Wednesday, March 18, at AO Arena in Manchester, England. Find the band's complete tour itinerary here. 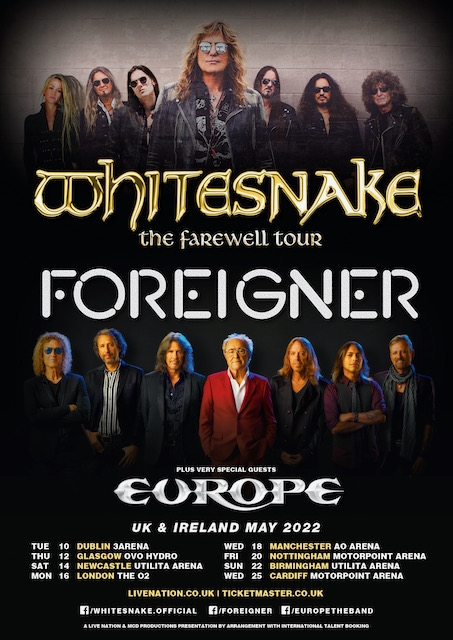 Sonic Perspectives correspondent, Robert Cavuoto, interviewed Joel Hoekstra about the formation of Iconic, the creation of the songs for Second Skin, the notion of a possible Iconic tour, and the status of the Whitesnake farewell tour. Check out their conversation below:

"This was a very refreshing and unique experience. Musically, very different from Stryper, which is of course very different from all the other projects I am involved with. This is more of a throwback to the past and it felt good to do that. It reminded me of how great the music of the past really is," says Michael Sweet. "Once the songs were arranged, I booked a studio and recorded my guitar parts, which is always the funnest part for me. I’m not sure why, but I guess because I’m a guitar player first and foremost and it’s just one of the most creative and fun parts of the process for me. To be able to get the right tone and play the right parts and hear it all come together....it’s very rewarding," he adds.

"The riffs were all very comfortable to me because I wrote most of them. 😀 I definitely have a great comfort level playing with Tommy Aldridge that’s developed over the last 8 years or so with Whitesnake. I’ve also co-written with Nathan, Michael, and Alessandro in the past, so everything felt very natural despite this being a “new" band," says Joel Hoekstra. "Michael asked me to write riffs without an arrangement (as he did with George Lynch on the Sweet & Lynch records) and then he arranged them with what he had written. I wrote melodic/hard rock riffs as that was the vibe we had discussed and then all the solo parts had more to do with trying to compliment Nathan’s vocal melodies and of course add a bit of fire," he continues.

"I am on an album with so many of my heroes and it feels amazing, to be honest. I was lucky enough to be involved in the writing of a couple of songs, but genuinely everything I hear from the guys, I knew I could do it justice. I also feel that the guys wrote stuff that suited my voice perfectly. These are not only great musicians, they are great songwriters. I practiced the songs a lot beforehand and then I recorded all my vocals at an amazing studio in only four afternoon sessions. I wanted to make sure it sounded like me and that my vocals had the precision that I'm so used to hearing from my vocal heroes, whom many of the guys in the band have played with. And of course, I was very aware that I would be on songs with the vocal master that is Michael Sweet. I felt the pressure for sure, but I just did what I felt worked and I'm so happy with the final result," says Nathan James.

"It was a blast playing some fresh, new material. Rehearsing, trying out parts virtually was not as much fun as doing it live, but considering the global circumstances, I‘ll take it. I just try to create a supportive environment for all involved while having fun in the process. It was easy to do as these songs really play themselves. It was a true labor of love, so very little work at the end of the day," adds Tommy Aldridge.

Michael Sweet, known for his work as guitarist/vocalist for the legendary heavy metal band Stryper, and his solo work, with his instantly recognizable voice and guitar style is really a name that needs no introduction to the hard rock faithful. Joel Hoekstra, currently of Whitesnake and Trans-Siberian Orchestra, is one of hard rock's premiere guitarists, whose fretwork is regularly praised and admired. Marco Mendoza's resume really speaks for itself (Thin Lizzy, Black Star Riders, The Dead Daisies, Journey, and so on) and the legendary bassist shines, as he always does, here. Tommy Aldridge, currently of Whitesnake, has also played with Ozzy Osbourne, Ted Nugent, and Black Oak Arkansas, among others, and is considered one of the greatest hard rock drummers of all-time. And handling lead vocals is none other than Inglorious' Nathan James, a young talent whose vocal style is a fitting, proper descendent of rock's vocal legends of the '70s.

Iconic was born from an idea conceived by Serafino Perugino, President & Head of A&R for Frontiers. He wanted to surround the talents of powerhouse vocalist Nathan James with established musicians from the rock and metal world to play a musical style in the vein of classic '80s hard rock. He immediately thought of Michael Sweet and Joel Hoekstra for the guitars, since they have been kicking around the idea of working together for a few years. Plus, Nathan and Joel were friends from their time in Trans-Siberian Orchestra and Sweet had become a fan of Nathan's vocals after hearing Inglorious. With the musical direction set and two wildly skilled guitar players on board, getting a powerhouse rhythm section involved was the final key ingredient and thus Mendoza and Aldridge were asked to join and brought their immense talent into the fold.