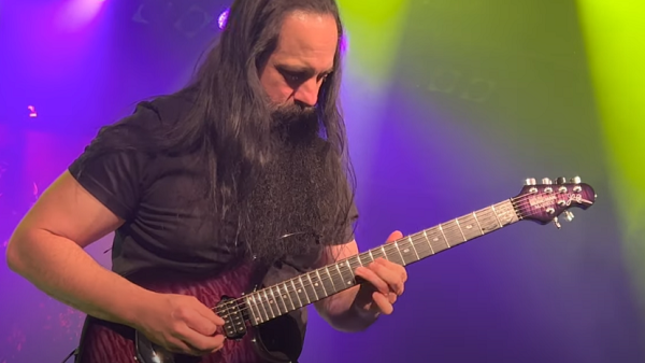 Petrucci kicked off his first-ever headlining solo tour of North America on October 5th in Providence, RI. The day after the show, he guested on Rob Rush Radio and commented on hitting the stage with former Drean Theater drummer Mike Portnoy for the first time in 12 years.

Petrucci recently spoke with Guitar World about reuniting with Portnoy for the tour, performing instrumental music outside of Dream Theater, and the differences between Portnoy and his replacement, Mike Mangini, as players in Dream Theater. Following is an excerpt from the interview.

Q: This tour sees you sharing the stage with Mike Portnoy for the first time since 2010. What sort of emotions course through you as you hit the stage?

Petrucci: "It's great to be playing with Mike again; it really is. The chemistry between us is so natural, probably because we've known each other since we were 18. And as you know, we played together forever, so even with the passing of time, in some ways, it feels like no time has passed at all.

It's funny because I've often said that this whole tour feels like I'm jamming in the basement with my friends, like when we were little (laughs). So, it's a great feeling to reconnect musically with Mike and to do this together; it's been awesome."

Q: Can you dig deeper into the chemistry that not just you and Mike share but this touring unit in general?

Petrucci: "This group of people on stage with me each night is awesome, man. With Dave LaRue (bass), I used to go see him play with Steve Morse and the Dixie Dregs, and I remember watching him and thinking, 'Wow. I really would love to play with that guy. He's phenomenal.' So, since I got asked to do G3 back in 2001, I've toured with Dave, and Dave has done every G3 tour, all my Guitar Universe camps, and he played bass on both my solo albums. So, he and I have great musical chemistry that fits like a glove.

And with Mike, like I said, we have that long history of meeting at Berkeley and being in Dream Theater together for 25 years, so when the three of us get together, it's awesome. And what's even cooler, Dave plays with Mike on another project called Flying Colors, so we're all very comfortable, and as a trio, we sound great off the bat. Everybody's super professional, very prepared, and playing their asses off. It couldn't be better."