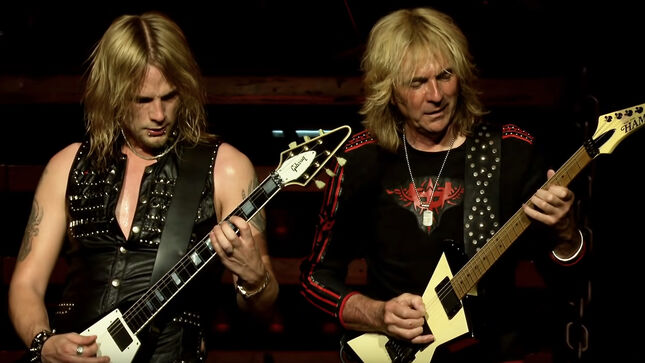 In a new interview with Greg Prato for Guitar World, guitarist Richie Faulkner talks about Judas Priest's first post-pandemic performances, the status of their next studio album, and his forthcoming Gibson Flying V signature model.

Richie was also asked how he compares playing with Andy Sneap to playing with Glenn Tipton, who suffers from Parkinson's and these days only makes rare appearances with the band.

“Glenn is a 50-year veteran and a rock star," says Faulkner. [Laughs] "Glenn just being there elevates the ‘rock star level’ another 50% in my opinion. I had Glenn in my cassette collection, I had Glenn’s picture on my wall with K.K. [Downing]. I didn’t have Andy’s picture on my wall. But there’s no difference of admiration, really - Andy is up there, he’s doing his bit, and he’s taking the challenge on, when we asked him to fill in for Glenn. He’s risen from strength to strength, really. So, the admiration for Andy is there, as well - just a different one. I didn’t have Andy on my wall as a kid. But Andy is a very take-the-bull-by-the-horns type guy, and he’s getting more comfortable with the songs and being up there. All credit to him. Obviously there’s a difference, but they have the same tenacity and drive to do their best. You can only give them respect for that.”

Asked how work is coming along on Priest’s next studio album, Richie reveals, “Obviously, we faced some challenges with schedules due to the pandemic. We wanted to keep it the same dynamic as [latest album] Firepower – as we all got together, played the songs in pre-production before recording them. Obviously, we haven’t been able to do that in the last 18 months because of the pandemic. So, we’ve got a ton of stuff written and a ton of songs almost ready to go. We just need to get together and start playing them together and ‘trimming the fat,’ as they say. You get a sense of that when you play them together – you get a feeling for ‘we need an extra bit here’ or ‘we need to trim that bit there.’ Just to sharpen those songs up and give them the last 20 percent. So, once we are able to do that, we can get in a room together, play them, trim the fat, and record them, we will. But we’ve got a bunch of songs that are pretty ready to go and they sound fantastic. We just want to put them down properly and release them to the world. So, I can’t give you a date, but as soon as we can, we’ll get in there and start work on that.”

Read the complete interview at GuitarWorld.com.