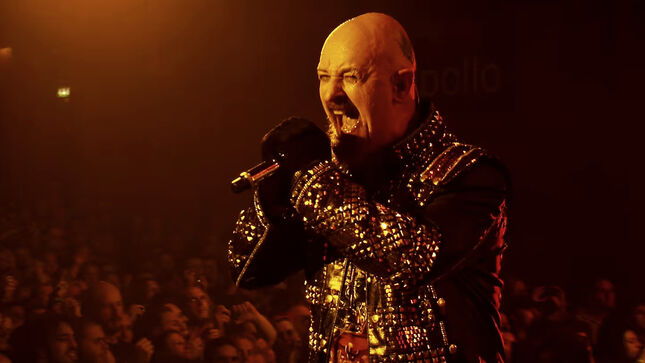 After the festival has been postponed, we are now looking forward to Wacken Open Air 2022: We can already unveil the first bands for W:O:A today, which will take place from August 4 to 6, 2022. There are also first announcements for Wacken Wednesday on August 3, 2022.

Jan Quiel from the booking team explains: “We want to move as much of the planned program into next year as possible and we are currently having highly positive discussions on it. Some bands already do have other plans for 2022, so we are more than happy to have great interest from new bands to join the lineup."

W:O:A co-founder Thomas Jensen on Wacken Open Air 2022: “Another year without W:O:A. It's sad, but we won't let it get us down. We are already looking forward to 2022, so it is great to be able to announce some highlights on the line-up today! Of course this isn’t all - we still have some great surprises in store for our fans!"

“The work on 2022 has already started in full swing. Our entire team wants to bring an unforgettable live experience to the Wacken stages with great attention for details. We can hardly wait to share it with all metalheads on the Holy Ground and finally celebrate together again!,” adds W:O:A co-founder Holger Hübner.

The first announcements read as follows:

"The Priest is back!" For the fourth time the Metal Gods in Judas Priest are traveling to the Holy Ground. 25 years of In Extremo also need to be celebrated with a very special show at W:O:A. Finally the time has also come for Limp Bizkit to delight the crowd with hits such as “Break Stuff” or “Rollin‘”. Rose Tattoo fronted by singer Angry Anderson are part of the party as well, while the show of As I Lay Dying promises one of the roughest pits of the weekend.

Lacuna Coil have already been on the stages of the Wacken Open Air five times, but now half a dozen is finally being filled. For the splatter spectacle of Gwar it is better to throw on your protective suits, a good dose of Bay Area Thrash is served by Death Angel and Thundermother will deliver finest hard rock, made in Sweden. The appearance of Motörhead guitarist Phil Campbell and The Bastard Sons promises to be a very special highlight as well.

At their first visit All Hail The Yeti encouraged heavy headbanging and will do so again, while Wolves In The Throne Room are celebrating their Wacken debut. Old School Death Metallers can look forward to Crypta. With Auðn a promising band can be announced that had their breakthrough at the W:O:A Metal Battle 2016. 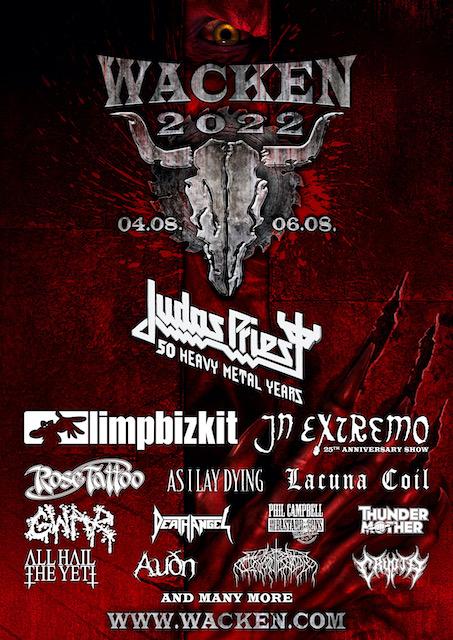 And that's not all yet! Although Till Lindemann unfortunately doesn't have time on Wacken Wednesday next year, several all-time fan favorites have been added to the line-up. The additional day (separate ticket required) brings five more bands - four of them can already be unveiled:

First up is Wacken veteran and power metal legend Tobias Sammet with his project Avantasia! For the fifth time the world’s best metal opera will be performed in Wacken. Gloryhammer, whose last Wacken concert was shorter than originally planned due to a thunderstorm, will be part oft he game as well. The Brothers Of Metal are among the most promising newcomers, therefore the W:O:A premiere of the brothers and sisters is just in time. On top you can also look forward to Varang Nord, the winners of the last Metal Battles. 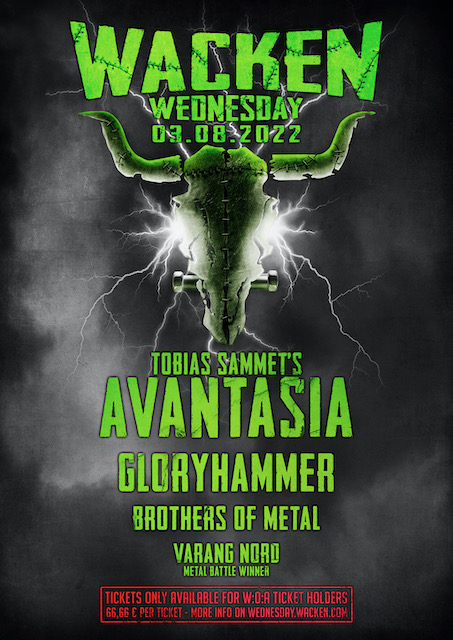 The start of the ticket exchange is scheduled for July 1st, 2021, all tickets for W:O:A and Wacken Wednesday can be exchanged. Just like last year, there will be suitable options for everyone. Wacken Wednesday tickets can also be purchased as part of the exchange. More detailed information and answers to frequently asked questions can be found via the updated ticket 2022 FAQ.

If you don't want to wait for the Wacken feeling until 2022, better keep your eyes and ears open, because ideas for a new live music format are currently being worked on for September 2021. We ask for a little patience for the development of the concept. More information will follow.