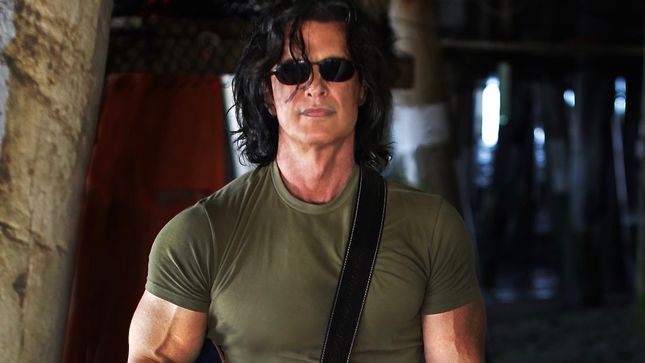 On upcoming new music: "We have some interest from some other record companies. It's enough to make me get back into the studio. I've been doing a lot of writing. I've been writing with some of the same guys I worked with on my last record The New Normal. There's a lot of hard work involved, but it always feels good writing, singing, and playing guitar."

On his long break from music and his 2019 return: "I put out Saints And Sinners in 1991 and then the music industry took a quantum shift. I just got burnt out on the industry itself in general. What was I going to do, put on shorts, get a bunch of tattoos, and try to do what other bands were already doing incredibly well... bands like Pantera. They were killing it and owning it. For me, to not be true to who I was just seemed disingenuous. I just sorta stepped out of it. I kept writing during those years, but I missed it and still loved it. Kip Winger called me one day and asked me what I was up to. I sent him some of my stuff and he said I should do a record through Frontiers. He was instrumental getting me signed to that label. They were very patient. It took me three years to do the The New Normal record. At the end of the day, the current scenario for companies like them is very limited."

On a future project with Kip Winger: "He played and did some back up vocals on The New Normal. We keep talking about doing something. The music industry is in such a state of flux, everything's going haywire. To get everything aligned where we could go in the studio together would be a dream come true for me. I would love that. The guys an amazing musician and we like the same stuff. I think it would be a powerful record if we had me, Kip, and maybe Ken Mary on drums. There would have to be a lot of business and logistical plates spinning to make that happen."

On his time with Alice Cooper: "I went to NYC to meet with Alice, Shep Gordon, and Bob Ezrin. These people changed culture with their work. I wasn't really nervous, more excited than anything. I walked in the room and Alice and I became best friends instantly. It's hard to explain. It's what he needed at that point, because he was coming out of a difficult time being in rehab. We just started writing together. I told him if you are going to reemerge on the scene, it can't be an oldies but goodies thing. It's gotta be a nuclear version of you. You have to come out and rip the shit with the first chords of your album and playing live. We did Constrictor with Beau Hill at the Record Plant in NYC. I hired Kip Winger at that point to play bass, so a lot of good things were happening. We wanted to use a real drummer, but Beau was pretty busy working on a lot of projects at that point. So he got this drum machine guy, who was amazing, but stylistically I think it's a little off. It made Constrictor sound a little too studio. As time went on, Alice and I really started evolving as a writing team. We were basically living together. It was during that "Nightmare Returns" where we really hit our stride. If you watch the video from that tour, you see these young musicians playing the intro... and when Alice busts through that cage door, it's like the commander is here. It was a great way for Alice to bust back on to the scene. That was our goal. We became this perfectly tuned machine and it shows on Raise Your Fist And Yell. We hit the ground running and kicked the shit out of that album. Alice and I were happy with both records."

Writing “Take It Off” with Paul Stanley for Revenge: "Bob Ezrin called me up and asked if I wanted to write with Paul Stanley. Of course! Paul is a very sweet guy. He's from NY, he's a little bit of a wise ass and a little bit of a diva. Writing with him was extremely focused. It was a great experience for me. I played that opening riff and he was like, 'That's it!' Ezrin invited me down to the studio and I was there when Bruce did the solo. What a fucking great solo, the guy is such a great guitar player. Working with Paul was amazing. Now this will make everyone who's a KISS fan jealous. Paul called me up after and wanted to know if I wanted to catch a movie! We went to see "Bill And Ted" together. I got to see a movie with Paul Stanley... how fucking awesome!"