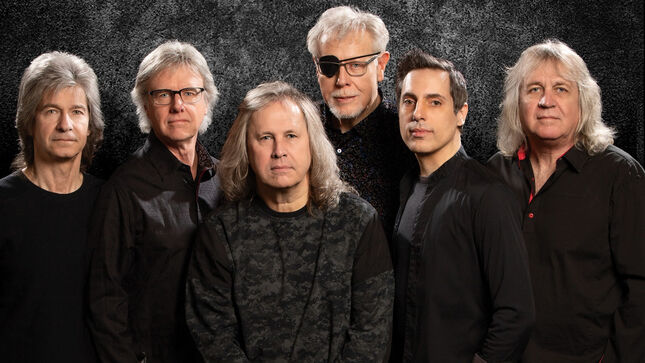 Kansas 50th Anniversary Tour - Another Fork In The Road is scheduled to launch on June 2 in Pittsburgh, PA and conclude on January 28 - in Fort Lauderdale, FL. Tickets and Kansas VIP Packages for most dates go on sale to the public Friday, January 27. Ticket information can be found at Kansasband.com, and here.

In 1973, the “garage band” from Topeka was discovered by Wally Gold, signed by Don Kirshner, and released their debut album in 1974. Kansas has gone on to compile a catalogue that includes sixteen studio albums and five live albums. Kansas has produced eight gold albums, three sextuple-Platinum albums (Leftoverture, Point Of Know Return, Best Of Kansas), one platinum live album (Two For The Show), one quadruple-Platinum single "Carry On Wayward Son", and another triple-Platinum single "Dust In The Wind". Most recently, Kansas has released two Billboard charting albums with 2016’s The Prelude Implicit and 2020’s The Absence Of Presence.

“Our entire career has been a winding journey,” comments Kansas guitarist and original member Richard Williams. “Whether it’s been the ‘original’ lineup signing with Don Kirshner, years on the bus, touring with Queen, worldwide success peaking with Leftoverture & Point of Know Return, the valleys of the 90’s and ‘dinosaur bands’ losing steam, various lineup changes, to our most recent ‘rebirth’ and success of our latest new music over the last eight years; there have been several forks in the road of that journey. This 50th Anniversary Tour and release will represent that journey and the forks along that road.”

“I’m incredibly excited about the 50th Anniversary Tour,” adds lead vocalist Ronnie Platt. “I tell people I’m not allowed to create a setlist, because it would be five hours long. There are so many songs I want to perform live. I think fans will be excited not only to hear our hits and fan favorites spanning 50 years of Kansas, but also some songs that haven’t been performed live in decades.”

Kansas is set to perform its “Kansas Classics” set during concert dates in March, April, and May of 2023. 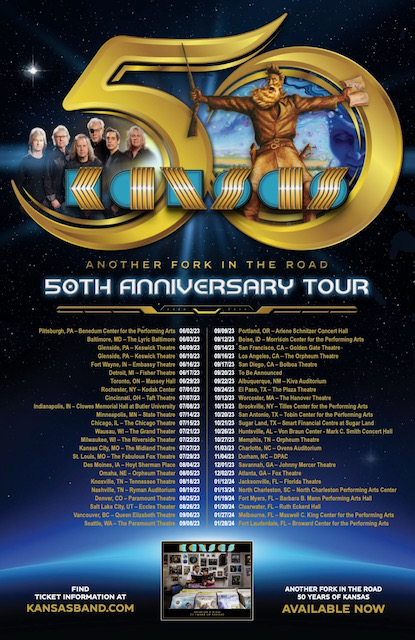 * Two additional dates to be announced

* More dates to be announced

InsideOutMusic recently released Another Fork In  The Road - 50 Years Of Kansas. A career-spanning collection, it features carefully-selected tracks from across the bands sizable discography, as well as a new version of "Can I Tell You" (listen below). Originally recorded and released on their 1974 debut, the song is updated by the current lineup, providing a full-circle perspective on the band’s long and continuing history that has seen them release 16 studio albums and sell in excess of 30 million albums worldwide.

Another Fork In The Road - 50 Years Of Kansas arrives as a 3CD Digipak collection, including extensive liner notes by journalist Jeff Wagner, as well as pictures of rarely-seen memorabilia and archive material, all overseen by founding member Phil Ehart. Order here.

The full tracklisting is below. Please note, due to licensing restrictions there are minor differences between the European & North American release.